AGBT ended over a week ago and I've been procrastinating ever since in going through notes and writing up companies.  First few days I had the excuse of family time on beautiful Sanibel Island to the north, but since Monday other than obsessing about COVID-19 (and cancelling travel plans) I have no excuses.  First up, the microfluidic library prep company Miroculus, based on my notes from talking to their Chief Commercial Officer, Adam Lowe
Miroculus unveiled at AGBT their Miro Canvas system.  This consists of a small footprint benchtop control unit and consumable cartridges.  The system is based on electrowetting microfluidic technology.  Electrowetting chips consist of a grid of squares which can be individually addressed.  By changing the polarity of the square, the surface can be made either hydrophilic or hydrophobic.  Sample or reagent aliquots can then be made to migrate across the surface by appropriate shifts in the polarity of adjacent squares, and such movements can include droplet splitting and merging.  Other elements have been placed on such devices, such as electromagnets for bead operations or thermal elements to enable thermocycling. 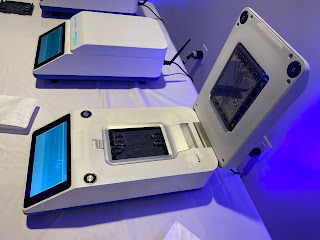 Electrowetting  has had a rocky history in sample prep.  Advanced Liquid Logic (ALL) developed such technology and first licensed it to NUGEN for its Mondrian system, which was later discontinued when Illumina purchased ALL and launched NeoPrep, which gathered a poor reputation on reliability and was discontinued.  Oxford Nanopore has worked many years on VolTRAX, which also uses electrowetting.  VolTRAX had a very long gestation period and by my completely unscientific analysis of Twitter never seems to get much traction.

Miroculus claims their system has two key advantages over prior ones.  One is that the chips do not use oil to encapsulate the droplets; a major complaint during the early VolTRAX beta period was the leaking of oil from the consumable cartridges.  No oil also means that the device can potentially apply mechanically vigorous methods without fear of generating emulsions and makes it compatible with ethanol and other chemicals that interact with oil.  The other is that the disposable cartridge has zero electronics in it; the electronics are all in the controller.  They claim this will enable lower failure rates of the cartridges, as well as a higher degree of recyclability. 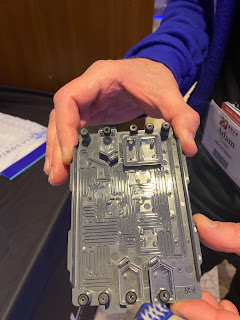 Another important feature of the devices is the ability to sense droplets, so that the system can detect droplets that haven't gone where they have been directed.  The initial offering will enable prepping a single sample and is aimed at owners of benchtop sequencers.  Twist and Miroculus have announced an agreement to port Twist's library prep and enrichment technologies onto the platform.  Miroculus' website has posters for a variety of protocols, from PCR-free genomic library construction to cell free DNA purification and even non-molecular biology methods such as combinatorial chemical synthesis.

An important component of the platform is the MiroPalette software, an appropriately colorful visual programming tool for designing programs for the system.  In my mind, this turns Miro Canvas into a microfluidic equivalent of an old electronics breadboard, allowing scientists with minimal experience to experiment with constructing microfluidic workflows.  Protocol design is high level: the user specifies high level workflows rather than something more resembling chess notation to direct each move.  An interesting component of MiroPalette is that after a protocol is designed, the system generates 1000 simulated specific designs to identify the best one.  This optimization includes considerations such as avoiding overuse of the same squares, which can lead to fouling, and undesirable crossing of reagent paths.

The initial kit will support single samples and go for around $30 a cartridge; the controller is expected to price at $25K.  This will support protocols with 12 reagents and three large volume wash reagents.  Beta testing is expected to commence in July with shipping by the end of this year.

It's an intriguing entry into the low throughput sample prep market, potentially removing user-to-user and experiment-to-experiment variability as well as the option of writing your own routines.  Oxford Nanopore has promised opening up VolTRAX for some time, but has been slow to deliver that.  Whether their promises of reliability hold true is something only customers and experience can answer.  Finally, don't expect Miroculus to be the last company to market electrowetting-based methods; yet another startup had a poster at AGBT.  But are we running out of appropriate modern artists for branding these devices?  Time will tell.

Posted by Keith Robison at 8:10 PM

I'm wondering how vulnerable a system like this is to cross-contamination (due to residual reagent sticking to a given spot and then mixing with a reagent that is subsequently moved to that spot). Are washing routines required, such that a washing solution 'follows' each droplet of reagent? Or, is the transport so clean that this isn't needed. And, are certain buffers problematic? In particular for fouling? I'm excited about these library prep systems and seeing what other areas of molecular biology they can be used for, but I'd like to get a sense for their limitations.

Adam from Miroculus here. We have done a lot of work to understand any trace material left behind by different reagents. We generally do not see any contamination in zones where reagents have tracked, with the exception of some biofouling in the thermalcycling zones. The software automatically avoids these zones after thermalcycling is performed. The cartridges are single use, so we don't have to worry about sample-to-sample carryover. Hope that helps!

It's now all corona all the time; you are not keeping pace! I had thought this wasn't going to affect me -- now there's no toilet paper in our store --; even the food sections are becoming barren. People are worried.

I am sure that you are very busy, though if you have a chance might you write a column that considered die Gedankenerfahrung in which everyone had a nanopore sequencer at home. Nanosequencer as human right.

Waiting for highly centralized medical systems to respond clearly can be seen to be an inefficient strategy. The natural tendency is to conceal the truth, then deny the truth, and ultimately to be overwhelmed by the truth.

Moving pathogen surveillance to the level of the individual would help avoid such counter-productive behavior. At what point would a sequencer identify a coronavirus infection? (i.e., would this be before someone became infectious?). In such a idealized world, would a viral pandemic even be possible? (If people could rapidly self-diagnose, then wouldn't this rapidly halt any such epidemic before it became a pandemic?). How economically and technically feasible would it be as of now for DIY
viral nanosequencing? For a diagnosis one would not need the complete viral sequence, only definitive DNA reads. Would a Flonge be enough?