One Gemini Celebrates Another

One of most truly useless pieces of information lodged in my brain is my zodiac sign; not once in my life have I had any interest in it.  But, given the available draws, it isn't too bad, as it's also the name of perhaps the most underappreciated engineering project of the second half of the 20th Century: Project Gemini
When I was a kid I'll admit a certain snobbery for Project Apollo.  Going to the Moon just captured my attention.  I remember watching one of the last missions from the moon and finding it unbelievable (I was, after all, only 4 when Gene Cernan left the last footprints on the moon).  How did they get that big buggy in that little lander?  I ate up the Snoopy version of the story and had a plastic Saturn V model that was completely wrong on colors (I think the stages were red, white and blue) but still stacked and separated. I imagined being squashed in my couch on liftoff.   Apollo left behind gargantuan infrastructure still in use today: the cavernous Vehicle Assembly Building and the unbelievably large crawlers to transport standing rockets down to Launch Complex 39.

Mercury was a bit cool because it was first, but Gemini?  No moonscapes.  No drama of two crewed vehicles docking with each other.  I tended to skip over that section of the books, heading for the stark beauty of the lunar surface.  The popular media hasn't been much better: Mercury is heralded in The Right Stuff and there is of course Apollo 13; most people have probably forgotten that Gemini shows up in First Man.

Now that I'm a bit more wise (at least, so I claim), I now appreciate each on its merits.  Apollo is still the glory hound, and I've finally sprung for the Lego 1969-part kit for a Saturn V.  The majesty of that bird slowly clearing the tower will always steal my breath.  But without Gemini, Apollo couldn't possibly have pulled it off.

The later Mercury missions demonstrated a degree of sophistication, but the capsule really wasn't designed for much beyond proving humans wouldn't go crazy in space (which at least one psychiatrist opined before Gagarin's flight).  Gemini was built to prove key technologies required for Apollo, both mechanical ones such as restartable liquid rockets and fuel cells for power, but perhaps more importantly the human technologies of spacewalking, working in zero-G plus rendevous and docking.  Every Apollo mission commander, save Mercury Seven alumnus Alan Shepard, would fly during Gemini. Indeed, for the landing dress rehearsal and the successful first landing attempt, the crew would be all three Gemini veterans.

Checking my facts on Wikipedia, I discovered one I hadn't come across: the Gemini capsule was nicknamed the Gusmobile because Gus Grissom had taken over design of it to a great degree.  So great a degree that NASA discovered that the dimensions wouldn't fit astronauts significantly taller than Gus's five and a half feet, requiring some redesign!  I might just fit the original at two inches taller.

Gemini was a true engineering program, systematically attacking and reducing to practice the important techniques -- and not without difficulty. Most of the true science required for Apollo was known at the outset -- so much is just Newton's Laws of Motion.  A few odds-and-ends remained to be ticked off, such as the Surveyor soft landers putting to rest the notion the lunar surface was a deep layer of dust that would swallow a spacecraft whole.

Rendevous and docking was particularly fraught: the first target vehicle exploded during launch, the second one had a shroud that failed to correctly open ("The Angry Alligator") and during the next docking attempt a stuck thruster on the Gemini capsule nearly killed Neil Armstrong and David Scott with a vicious roll.  Similarly, Ed White had difficulty returning to his capsule because engineers hadn't accounted for the ballooning of his flexible spacesuit in a near vacuum.  Gene Cernan worked himself to exhaustion trying to perform simple mechanical operations on a spacewalk, because the engineers had forgotten that Newton's Laws meant that trying to turn a wrench would mean the wrench would also turn the astronaut.

But each of those issues was conquered; later spacewalks ("EVAs") would solve the ballooning problem.  Docking was not only achieved, but the docking target's Agena engine was used to set a record for Earth orbit altitude that stands today.  Buzz Aldrin showed that exterior work was perfectly workable with the correct restraints and holds built into the spacecraft exterior.  That was critical to some of the later Apollo mission's science, which employed cameras and other experiments in the non-returning Service Module.  Such a retrieval was performed by the recently deceased Al Worden, the only moonman I've ever shaken hands with (at a Kennedy Space Center tourist meet-and-greet, but still a highlight for me)

Other mission objectives were met on the first try.  After the first docking target failed on launch, NASA moved up another launch so that one capsule could rendezvous with the other.  In contrast to a Soviet stunt that happened just before this, it wasn't some clever timing of when to make the second launch.  The combined mission showed that NASA's engineers had mastered the counter-intuitive logic of orbital operations, where to catch up with a target you must go slower (the only time I've come close to mastering this was reading Seveneves; Kerbals is supposed to be the other sure route to enlightenment in this space)  The two craft kept station with each other for multiple orbits, flying within a foot of each other.  The the one craft, with Frank Borman and Jim Lovell inside, went on to complete a two week mission in orbit.

Gemini might have had even greater feats.  The capsule was designed to take a foldable wing to enable gliding to a landing.  The Air Force's Manned Orbiting Laboratory (MOL) project would have used Gemini to ferry astronauts, with the astounding idea of the transfer tunnel between capsule and station going through the heat shield!  There were even proposals for Gemini to be the capsule to carry astronauts to lunar orbit and then land in an open cockpit vehicle even more spindly than Apollo's Lunar Excursion Module.  Efforts on the Air Force's "Blue Gemini" even featured the first every refurbishment and re-use of a space-flown vehicle!

I'm thinking a lot about the engineering of the space program because I'm truly living up to my official Ginkgo title: Principal Engineer.  I usually think of myself as a scientist, but for our current endeavour the science is largely settled: it's the scaling that is the challenge.  We've committed to taking processes used around the world on a lab scale and jack them up to factory scale.  Ten thousand SARS-CoV-2 RNA samples per day! That's over one hundred 96-well plates coming in the door daily.  Like Gemini, I don't expect everything to go right the first time.  But if we stick to it and learn from our initial mistakes, then I expect our team will get the system built.   We won't roar off a  pad like the Titan II boosters for Gemini , but there will be a torrent of data from us to the public databases. 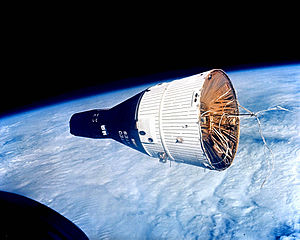 Gemini 7 seen from Gemini 6A during the first true rendezvous in space
(Wikimedia)
Posted by Keith Robison at 10:23 PM