PromethION: Straining at the Starting Gate

Due to the usual time conflicts, I've only watched bits-and-pieces of the Winter Olympics from South Korea. Which is unfortunate, as I do enjoy observing many of these events as so many combine grace, power and finesse.  In the various timed events, the competitors can be seen tightly wound, ready to spring out at the crack of the start.  Increasingly, that is how Oxford Nanopore's PromethION looks: a superb performer ready to bolt away.

Read more »
Posted by Keith Robison at 9:39 PM No comments:

AS AGBT opened, optical mapping company BioNano Genomics announced a new scheme for labeling genomic DNA inputs which substantially improves performance.  Sven Bocklandt from the company sat down with me yesterday to walk through the new Direct Labeling

Twist Biosciences today launched a new product into the sequence capture space.  CEO Emily Leproust was presenting to the Gold Sponsor workshop as I started writing this, but she also sat down with me yesterday to preview the new offering for targeted sequencing.

Read more »
Posted by Keith Robison at 3:10 PM No comments:

I spent breakfast with 10X Genomic's Michael Schnall-Levin and two of his 10X colleagues gave me a sneak peak at three new single cell products they are rolling out at the workshop I'm typing away at now.  These enable measuring protein targets of antibodies, mapping out accessible chromatin regions with ATAC-Seq, and mapping copy number variants (CNVs) at single cell resolution.  All use the existing Chromium Controller instrument.

Read more »
Posted by Keith Robison at 5:07 PM No comments:

Today at AGBT is light on the science talks; the afternoon is free for lazing around the resort complex -- or for swimming laps in the lazy river (which makes it a not-so-lazy-river). I can only manage downstream; upstream is an aquatic treadmill.  A key task on Day 1 is to pick up one's registration materials.  At one conference I failed to do this promptly and discovered to my dismay that the desk wasn't open during the opening reception slash poster session -- so despite being a speaker I had to sneak into the room via a side door!  Registering means picking one's meal pass -- I took the temporary tattoo over the wristband option -- and grabbing the vaunted AGBT backpack. 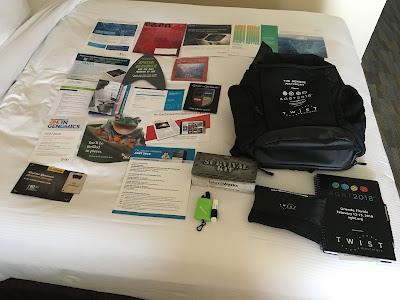 Read more »
Posted by Keith Robison at 4:07 PM No comments:

After I post something, there's almost always something I realize I left out.  In my piece on Clive Brown's webcast of ONT improvements, not only did I forget a few key details but my wording led to some unfortunate confusion, as judged by a comment.  Someone took me up on my idea on how detecting large fragments during a run might work -- and showed it doesn't pan out (which Clive Brown confirmed).  And to top things off, a BioRxiv preprint showed up that exactly covered something I alluded to.

Clive Brown's webcasts are always entertaining, and even the 6am Eastern Time start for Thursday's didn't hinder that aspect -- though I am thankful I'm not on the U.S. West Coast because I really don't function at 4am.  Even at 6am, I was frequently shutting off my iPad screen or exiting the presentation, as screenshots on iOS involve simultaneously pressing Power and Home keys.  At that hour, my never great fine motor skills just aren't reliable.  Hopefully I won't make the dog's breakfast of this, as that's usually all I'm good for processing at that hour!

Still, lots of updates and promises as well as a number of "wait until London Calling" teasers.  Just to get this out of the way, I'm going to report the launch dates that Oxford mentioned -- anyone in this space should know that Oxford is very good at delivering what they promise, but not very good at delivering when they promise.  You can also find notes by David Eccles to check me against or watch the presentation recording from ONT.

I'm behind on these posts.  My usual foibles were largely responsible for a while, but then I had the major (and sad) family issue that has kept me off balance for  two weeks. Someday I may write about that, but for now back to the major sequencing vendors.  Though with Oxford Nanopore, the problem is where to start?  But now is the time to get moving, both since Oxford's Clive Brown will be webcasting an update on Thursday and I'll be at AGBT next week and expect to be busy with news flow from that event. Clive's webcast is titled "sub-$1000 human genomes on Nanopore (and other goodies for H1 2018), so expect quite a casserole of tempting updates.  Certainly it is enough to get me to try to be fully mentally awake at 6 am, something that does not come naturally.