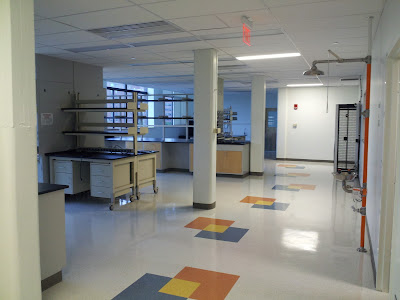 One of the attractions of my new shop was the possibility to see a biotech company built from the ground up.  Each of my previous companies had been a long-standing concern by the time I got there; even Codon Devices had a year plus under its belt and some equipment already mothballed.  The new venture moved into its first lab space last week, and as you can see from the picture all we have at the moment there are bare walls.
Read more »
Posted by Keith Robison at 8:37 AM 3 comments:

The first computer I ever tried to program was built from a kit by my brother and father.  The DATAC-1000 was a single-board machine, with that single printed circuit board about the area of a large laptop (image on page 9). Sporting a grand 1K of RAM, it was a grand machine.  User input-output was entirely through a set of binary touchpads and LEDs, though a cassette tape interface enabled storing and reading programs.  If I helped any with it, I might have sorted the resistors since I had just learned the color code.  The machine sported the same processor as some other machines of the time, such as the KIM-1 and the PET and even something called an Apple.