I’m solo this year - Massachusetts schools have break next week. So I’ll be focused on the meeting and not asking if an underaged minor is allowed in the vendor suites. Or worrying if an errant pass in our game of pool football is going to bonk the head of a visionary CEO’s daughter.

AGBT once had a reputation for some crazy tech to be rolled out. Some of these made it to commercialization - Clive Brown’s famous/notorious 2012 Nanopore talk or Jonathan Rothberg closing 2010 by unveiling Ion Torrent. Many others have disappeared quietly or are publicly invisible, such as Genapsys. No such presentations are apparent in the agenda.
Still, there will be fun surprises. The poster section is likely to have gems. There’s also still emerging technologies like Nanostring’s Hyb & Seq, which has two different talks listed.
But of course I live the science talks too, particularly when they introduce you to crazy ideas. A memorable one from my last AGBT was analyzing population genetics on extinct horse populations via bones unearthed by gold miners. Now that’s crazy cool!

For a few years now I’ve used Storify to organize and annotate tweets around big events. It helps me get an overview, particularly of tweets with images. Plus, posting those is a way to credit important sources and give readers of my summaries the tools to dig deforestation and spot any issues in my work.

Alas, late last year it was announced that Storify is being wound down. Adobe bought the company and wants to transition users to their own content creation and management tools.
I should have seen this coming - or perhaps I did sense it. Storify had been augmented with a Storify 2, so I explained away the warts as a lack of interest in the older, free product. Warts like the editor not working in Safari on the iPad or a lack of a way to slurp entire Twitter threads into a story. Or no iOS app for offline editing.

Storify was convenient in part because it provided both content creation and hosting. Plus it was free. It’s unfortunate that Twitter didn’t see it as an obvious extension of their ecosystem and grab the company. They have some poor knockoff that I’ve seen few use and which I believe lacks the ability to integrate other content types.

It hasn’t escaped my notice that Blogger/Blogspot has many of the same symptoms - can’t edit offline, can’t edit reliably on mobile devices. The editor is clunky for adding Tweets in and doesn’t have the neat Quora editor feature of auto-capturing a webpage titled if you paste in a URL. I am trying out drafting this piece in Sheets - fingers crossed that the copy-and-paste isn’t tedious to clean up [postscript: some required, but not terrible]

I have dreamed some ideas for a personal Storify replacement, some of which are insanely grandiose and involve venture funding. In the real world, I might throw together a slightly modified version of my current Twitter mining tools.

Who Will Have the Best Swag?

There’s no denying it - AGBT is a highly commercialized meeting and one draw is the freebies. My daily backpack is the 2014 AGBT backpack, which has survived daily abuse most of the time since and has only recently developed a serious rip. Agilent gave out these great nylon caps that were wonderful to wear in the pool. I was bummed to miss PacBio’s brilliant LEGO minifigure giveaway last year - this time its a drawing for the Women of Science LEGO kit - a fine prize, but odds are poor. And there's always the necessities -- I expect someone will fix my oversight of failing to bring thymine dimer repellent.

By My Hat You Shall Know Me

At the last AGBT I attended., a long-time electronic correspondent and I kept trying to connect for a face-to-face, but something always went wrong - one of us waylaid or the appointed meeting spot was too jammed or such. After the conference was over, I struck up a conversation in a hot tub to be social - bingo! Mission accomplished by serendipity.

I'm going to try to get an edge on blind luck this year. If you want to find me - for chats or brickbats or the like - look for one of these three hats - I’ll try to be consistent about wearing one of them (well, unless there’s a better pool hat). The light blue hat is a prize from a trip to my alma mater this past autumn; I instantly loved the graphically spare tribute to the school mascot. AGBT will end this year with a space-themed party, so the middle hat was an obvious choice to bring -- now if I could only decide which of my three NASA t-shirts to wear to that (all that I own that still fit me -- I have a GE AstroSpace and another one that long ago were gifted to my offspring, since he might fit in them). The black hat is simply tolerant of being drenched in a swimming pool; wouldn't want the other two to be bleached by chlorine! 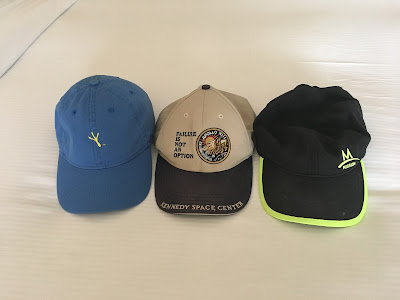 Have something you'd like to know more about at AGBT but aren't here? Tweet me or email me and I'll make a fair effort to address legitimate questions.