If you made me pick out themes from AGBT 2018, I think I would pick out the following (asterisks indicate topics I should be touching on with further AGBT-related posts).

How will such genomes be sequenced and assembled?  That's appears to be up in the air.  PacBio and Oxford Nanopore will likely be the favorites, but don't count out 10X linked reads.  Will these be supplemented with other technologies: BioNano Genomics with its ability to scaffold entire chromosome arms or perhaps Dovetail Genomics* or Phase Genomics with Hi-C technologies.  Nabsys* has rebooted, and while very small could also be a contender for added value.  And will polishing with short reads remain a requirement?  And even with all this, will there be problematic regions beyond heterochromatin?

Second, oligo-tagged antibodies are charging onto the scheme, allowing quantitative protein assays to be converted to assays readable via short read sequencers.  I haven't been following the space and would hardly be shocked if this was evident several years ago, but for so long it seemed such couplings were forever stuck in development labs.  This showed up in many presentations, including 10X Genomics "sequence features" and NanoString's spatial microscope.

A third theme is clearly the continuing development of single cell genomics technologies.  I already covered 10X Genomics' near-future applications for single cell 3' RNA-Seq with 'protein features', copy number profiling and ATAC-Seq.  Mission Bio didn't present, but I'll soon have an update on their single cell targeted sequencing.  Other companies are in the space as well: Takara had an instrument in their suite based on their acquisition of Wafergen.  And academia continues to innovate.  For example, Jay Shendure gave an update on his approach using fixed nuclei.

Something to watch for next year is the rise of spatial 'omics information.  ReadCoor, which is trying to commercialize FISSEQ spatial RNA sequencing, was a sponsor of the opening party but didn't have any scientific presentations.  NanoString gave an update also on their spatial microscope scheme -- which I will cover soon but see Dale Yuzuki's detailed report.

Rick Wilson fired off the meeting with some commentary one why it is again not at Marco Island.  The construction on the Marriott had continued to drag on, though the hoteliers promised it would be ready for AGBT18.  But the organizers hired a structural engineer to check out the structure and he was dubious on the timeline.  So AGBT passed, which then proved provident when Hurricane Irma took a direct swipe at Marco Island.  But back to Marco next year!

I actually had a chance today to get a peek at the new venue.  Since this week is school vacation week in Massachusetts, the family decided to join me in Florida and we picked Marco Island.  I've now had quite a tour of Florida via some rambling shunpiking which took me through the heart of the state's citrus and cattle farming region -- and then yesterday my first trip across Alligator Alley.

I took a walk up the beach today and looked over the new "Lanai Tower", which indeed is not quite complete, as shown in the image below.  In place of the old convention area and small Lanai suites is a hulking new building.  Otherwise, the exterior of the resort seems mostly the same -- I did spot a new tiki bar. 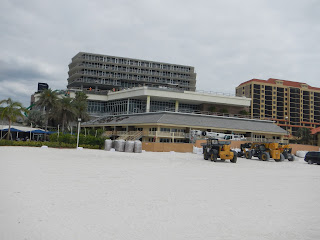 Signing Off for Tonight

By the way, my hat trick of hats seemed to pay dividends.  A couple of people came up to me to comment on the blog and I think the hat helped as a beacon.  It certainly helped to be wearing the Delaware hat when someone asked my connection to Delaware and I finally got to meet Brewster Kingham of their excellent core sequencing facility.  I've done work there -- my alumnal contribution one year -- but it's always good to put a face to a voice on the phone.

Well, the tattoo is almost gone.  Too much to write and too little time and energy.  One solution, whose mention horrifies my spouse, would be to head over the border to New Hampshire when I get home and get my skin emblazoned with a permanent pass to AGBT. 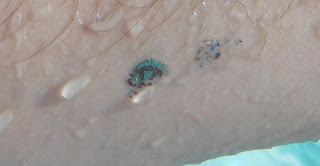 Posted by Keith Robison at 9:39 PM