Ugh.  I let the month of April slip away without writing and now have almost let May do the same.  But some leftover euphoria from a huge experimental breakthrough on our current diagnostics project at the Gene Factory plus the feeling I shouldn't let news tied into an earlier post slip off, and here I am.  When I wrote about sequencer startups back in February based on their websites, I put Stratos Genomics near the front of the pack.  Roche Molecular apparently agrees, announcing a week ago that they are acquiring Stratos.
Stratos' platform is based on nanopore detection and a chemistry called Sequencing-By-Expansion (SBX).  The more I look through the limited materials detailing SBX -- Stratos' video, their patent drawings, Nava Whiteford's blog post several years back -- the more I wonder if this arose out of a late night bar bet between nucleotide chemists.

In the early days of being educated about biochemistry it seems inevitable that enzymes are introduced as amazing catalysts with absolute specificity for their substrates.  Later one is exposed to the truth, that there are only some parts of the substrate that are interrogated and others ignored.  Which we should be grateful for, or else many interesting drugs just wouldn't exist which mimic enzyme substrates.  A key class of such drugs are nucleoside inhibitors used primarily in virology and oncology, which polymerases can mistakenly incorporate into DNA or RNA.  Such analogs were of course fundamental to the development of Sanger sequencing and later a multitude of other sequencing chemistries relying on polymerases.

Frederick Sanger was very modest man (who of course, to invert the slam on  Clement Attlee, had very much to not be modest about) and his dideoxy terminators are a very modest change to the structure of native nucleotides.  Next came fluors on the bases to support automated Sanger, then increasingly complex reversible chain terminators and cleavable fluors to support fluorescent chain termination schemes such as Illumina and Helicos.  Some of the baroque structures were driven by science, others probably to dodge patent blockades put up by others.

Pacific Biosciences upped the ante on "what can you get a polymerase to accept" by generating gigantic dendromer structures linked via the gamma phosphate.  These enabled getting the fluorophore, with it's nasty habit of generating polymerase-killing free radicals, as far from the polymerase as possible.  But none of that strangeness is incorporated into the newly synthesized chain.

SBX is a whole 'nother story.  Again, seems like one chemist dared another that something couldn't be done.  Some of the compounds sketched in their patents have ginormous bits poking out to the side, often attached off the side to that alpha phosphate.  These "Expandomers" can be treated chemically to unfurl these extensions, often simultaneously breaking the linkage between the alpha phosphate and the nucleotide so that the extension now serves as a key component of the linkage between adjacent nucleotides.   Some of the most outrageous concoctions (see image below cut from a patent) 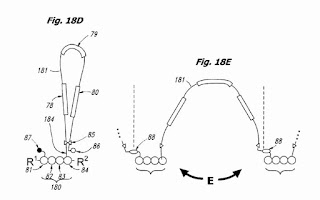 would seem to only be added by being built into oligonucleotides and then ligated in. but others are intended to be incorporated by polymerases.  Of course, such polymerases have been modified to make them more gullible in accepting such faux nucleotides; Stratos' website emphasizes that they've been engaged in extensive protein engineering to enable this.

Stratos' website describes a short read sequencing protocol based on amplifying the target to incorporate expandomers, chemical treatment to unfurl them and then a nanopore platform to read the expanded chain.  By incorporating various elements in the expansion segments, the signal for different nucleotides can be maximized and, claims Stratos, the translocation speed can be managed.  Stratos' website shows actual data from reads, claiming they stream through at a very predictable one per 1.5 millisecond rate.

Since an amplification is involved, any epigenomic marks will be lost and there is a potential for nucleotide misincorporations to induce errors.  The replication requirement also is a constraint on read length, which is likely one reason Stratos' hasn't gone for long reads.  The small benchtop instrument depicted on their website has a display suggesting a run with an average readlength of 453 bases.  I based some of my earlier take on the displayed raw signal with basecalls plus that image, though at least one skeptic (cynic?) has remarked to me that it could have been rendered electronically.  The box is depicted as having a consumables cartridge smaller than a smartphone

There aren't many other details available -- I don't see any talk of how many reads a run might generate.  No real information about the error profile. Well, I was crazy enough to key in the sequence from the video showing basecalled signal scroll by: it's 127 bases and the first 100 match a bit of HIV and the last 29 match a different bit (2 bases at the end are in both alignments) with no mismatches.  Not much to go on.  But if such an instrument really delivered a simple library prep -- dare we dream that any two primers of appropriate distance apart will work? -- and a decent number of cheap high accuracy reads, it could well find a foothold.  That image on the website predates the current epidemic, but I can't help thinking that 450 bases is longer than the amplicons in the ARTIC protocol for sequencing SARS-CoV-2, almost certainly the most popular scheme for doing so. But on Nanopore PCR is followed by a ligation protocol (yes, there is another scheme now using longer amplicons and rapid tagmentation), tagmentation for Illumina or using tagged primers and long MiSeq or NovaSeq SP chemistries.  If the Stratos box existed and really had a simple downstream prep -- something resembling PCR in ease of setup -- it would have gathered quite a following during this pandemic.

What is Roche going to do with Stratos?  They're a bit notorious for failing to advance 454 and NImblegen and it hasn't always been easy to tell if Genia is still active (though it is!).  Shawn Baker threw out the possibility on Twitter that Roche might meld the best parts of Stratos and Genia -- say if one chemistry is working but the other's nanopores are behaving better.  Or perhaps it's an IP consolidation play -- looking over Genia's patent titles there's one on using lipophilic tethers to drive library molecules to the nanopore, a trick that Oxford Nanopore uses and has their own IP on.  IP crowding might be one reason Stratos' management considered -- or perhaps even solicited -- a sale.

Going into a bigger entity means losing a lot of visibility on what's going on, even if that is still often limited.  Small companies must often release news to drive investment and partnership; Roche doesn't need that.  Quite possibly Roche will try again for a vertically integrated diagnostics franchise, the dream of many (such as QIAGEN) that has obvious attraction but I feel is a mistake.  The diagnostics applications appear -- and are -- lucrative, but many of those originate as underfunded academic projects.  Without academia kicking the tires on your platform -- and exploring many product development avenues for free or nearly so -- IMHO sequencing platforms will never reach their true potential and the revenue that goes with that.  But I'm a technical geek, not a finance guy, so of course I'll think that.  Roche is not a newcomer to Sequencing by Acquisition; perhaps the third time will be the charm.
Posted by Keith Robison at 11:41 PM

The acquisition price seems to have been below reporting requirements (unless I've missed something). So I suspect it was acquired at a relatively low price.

Roche had previously invested in them, which also may have locked out some buyers?

I don't think I saw anything in the patents about motion control. Unless the expansion is from 1bp to kilobases+, I would imagine they would still need some kind of motion control to get a readout (or maybe bulkier labels?).

From memory their patents refer to alpha-hemolysin, which probably isn't the best pore to be using.

So, I had lots of open questions. They are not the first company to try and get an "expandomer" type approach working. So I suspect it's problematic. And if it can be made to work, it might be difficult to produce something competitive.

Will be interesting to follow patents and publications to see how things develop.

I don't get it, why don't Roche just make an offer for ONT? They'd get them at 2-3 billion maybe (not much money for them and they get an already working diagnostic with huge potential)?
It seems exceedingly doubtful Roche will change habit of a lifetime and develop anything.