My piece on the near amnesia in U.S. culture of the 1918-19 Influenza pandemic provoked a number of helpful comments, emails and conversations.  While I would stand behind the statement that it left a light footprint, there are a number of interesting cases, some of which I would never have found by conventional means.  Sometimes the collective wisdom of the internet is best for uncovering things, even when you're married to someone who catalogs books for a living.

In addition to helpful emails, I was asking my mother for any more details on my grandfather's case while he served in the American Army of Occupation in Belgium.  She mentioned another story I had heard bits of but hadn't pieced together.  When she was growing up, there was an older, childless couple who was extremely kind to her and would invite her to come over to their house to play. Turns out, they had lost two children to the pandemic.

In the documentary space, several people pointed out that PBS produced an episode of The American Experience.  I keep meaning to watch it, but haven't quite gotten there.

Several people also pointed out that veteran science reporter Gina Kolata has a book "Flu" on the pandemic, which I grabbed from my local library along with several others before that institution closed.  I've started it and was struck by Kolata relating her own familial amnesia on the subject: her maternal grandfather died in the pandemic but family lore hadn't really captured that fact, only that he died of something "brought home from the factory".

Another book that was recommended by a correspondent, but I don't have hands on a copy, is Pale Rider by Laura Spinney.  There's also an academic paper titled "The 1918-1919 Influenza Pandemic: A Pale Horse Rides Home from War".

Why all those pale references?  Turns out the best known fictional piece on the pandemic is Pale Horse, Pale Rider by Katherine Anne Porter and luckily available on Kindle.  I knew of her from at least one short story and from watching Ship of Fools, which I rewatched the other night.  It's a story set in the 1930s about persons in denial to the impending threat of Nazisim, but parallels to the events of earlier this year as COVID-19 spread.  It's an interesting novella, based on Porter's own near death experience with flu during the pandemic.  Full of unreal dream sequences and some really long sentences; her style is distinctive.  The title is apparently from a spiritual originally sung by slaves in the Southern U.S., telling of death coming for many members of the singer's family.

A commenter on my earlier piece recommended They Came Like Swallows (1937)by William Maxwell Jr. as another piece of fiction telling the story of the pandemic.

My middle brother's significant other had keyed me into the Porter story; Brian noted a blues song by Blind Willie Johnson which includes


In the year of 19 and 18, God sent a mighty disease.It killed many a-thousand, on land and on the seas.

and that in turn led to the 1919 Influenza Blues  by Essie Jenkins; I think it is certain she never saw cover art in her lifetime


On a more humorous note, I present this even more anachronistic ad placement during my search for these pieces 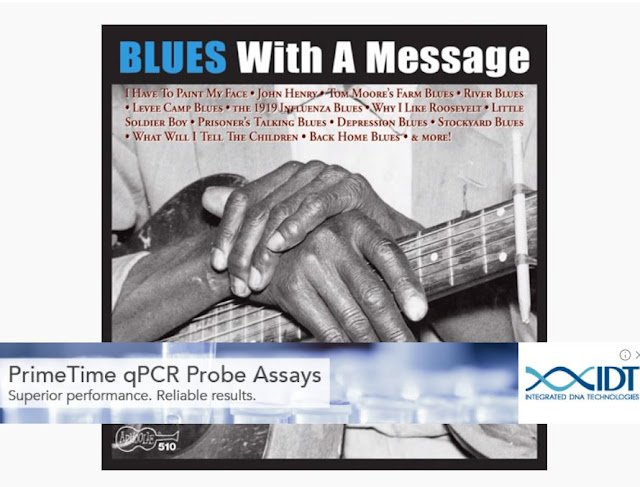 So there are memories in the collective consciousness.  Nothing like World War I with Snoopy fighting the Red Baron embedded in childhood memories.  But there are traces. And I thank everyone who has helped me find them and enabled me to enrich my background.
Posted by Keith Robison at 10:53 PM

If it hasn’t been recommended to you already, I just finished “The Great Influenza” by John M. Barry 2004. It’s a fantastic piece of science/medicine history. Barry weaves some very compelling biographies of the principle medical scientists involved, including a superior treatment of the singularly remarkable Oswald Avery. Near the end of the book Barr does spend some time exploring the exact question you raise here about why such a catastrophic pandemic left vanishingly few cultural traces in American memory and the answers he offers are heartbreaking.