Last week at this time I was surviving a terrible electrical storm -- tremendous cracks and crackles all around me. Luckily, it was just the lightning show at the Boston Museum of Science, featuring the world's largest Van de Graaf generator and a pair of huge Tesla coils and other sparking whatnots. TNG was part of a huge overnight group.

I love the MoS and always enjoy a trip there. But it isn't hard to go there and wonder what the future of such museums are and how the current management is taking them.

Exhibit #1: The big event at the MoS right now is the traveling Harry Potter show. We of course got tickets and lumped on audio tour. It's great fun, especially if you enjoyed the movies (it is mostly movie props & costumes), but makes absolutely no pretensions of having even a veneer of science. I've seen movie-centric exhibits at science museums before and they usually try to at least portray how movie technology works. None of that here, other than an occasional remark on the audio tour. Clearly, this is a money maker first and a big draw. But do such exhibits represent a dangerous distraction from the mission of a science museum? Would such a show be more appropriate in an art museum (it apparently was in the art museum in Chicago)?

Another exhibit could also could be described as more art than science -- but is that necessarily a bad thing. It was an exhibit of paintings by an artist who attempts to portray large numbers to make them comprehensible. The exhibit was sparse -- a small number of paintings in a large space, and they really didn't do much for me. Many had a pontillist style -- the dots summing to whatever the number was. One even aped Sunday in the Park. But were they really effective?

Art and science are overlapping domains, so please don't lump me as a philistine trying to keep art out. But I still think there are better ways to host art in a science museum. An in depth exhibit on detecting forgeries or verifying provenance would be an obvious example. The exhibit on optical illusions features a number of artworks which can be viewed in multiple ways.

We actually slept in an exhibit called "Science in the Park", which has a number of interactive exhibits illustrating basic physics concepts. It is certainly popular with the kids, but sometimes you wonder if they are actually extracting anything from it. Could such an exhibit be too fun? One example is a pair of swings of different lengths, to illustrate the properties of pendulums. A saw a lot of swinging, but rarely would a child try both. The exhibit also illustrated a serious challenge with interactive exhibits: durability. The section to illustrate angular momentum was fatally crippled by worn out bearings -- the turntable on which to spin oneself could barely allow 2 rotations. Two exhibits using trolleys looked pretty robust -- but then again some kids were slamming them along the track with all their might.

The lightning show is impressive. I think most kids got a good idea of the skin effect (allowing the operator to sit in a cage being tremendously zapped by the monster Van de Graaf). But how much did they take away? How much can we expect?

Some of the exhibits at the museum predate me by a decade or more. There are some truly ancient animal dioramas that don't seem to get much attention. Another exhibit that is quite old -- but has worn well -- is the Mathematica exhibit. There was only two obvious updatings (a computer-generated fractal mountain and an addendum to the wall of famous mathematicians). It has a few interactive items, and most were working (alas, the Moebius strip traverser was stuck).

One of the treats on Saturday morning was a movie in the Omnimax screen, a documentary on healthy and sick coral reefs in the South Pacific. It's an amazing film, and does illustrate one way to really pack a punch with photos. While the photos of dying and dead reefs are sobering, to me the most stunning photo was of a river junction in Fiji. One river's deep brown (loaded with silt eroded from upstream logging) flowed into another's deep blue. I grew up on National Geographic Cousteau specials, and could also appreciate the drama of one of the filmmakers' grim brush with the bends.

One last thought: late last fall I stumbled on a very intriguing exhibit, though it is unlikely to be the destination of any school field trip. It's the lobby of the Broad Institute, and they have a set of displays aimed at the street outside which both explain some of the high-throughput science methods being used and show data coming off the instruments in real time (some cell phone snapshots below). The Broad is just over a mile from the MoS and there's probably a really fat pipe between them -- it would be great to see these exhibits replicated where large crowds might see them and perhaps be inspired. 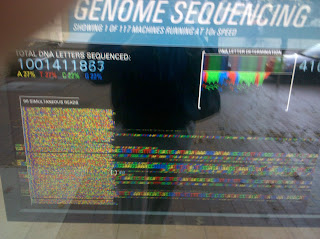 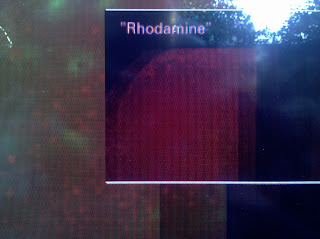 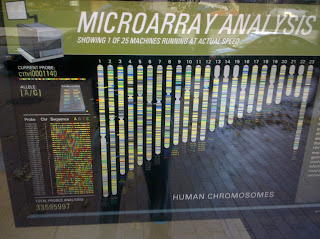 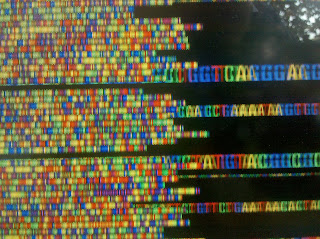 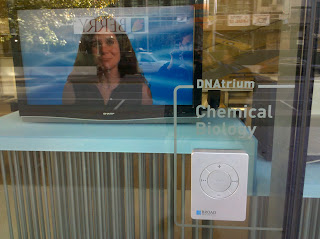 Email ThisBlogThis!Share to TwitterShare to FacebookShare to Pinterest
Labels: museums

Yes, I've always admired the displays at the Broad (and I'm a JCVI person). Very effective outreach (to use NSF jargon).

Those animal dioramas have been their since I was in elementary school in the late 1960's. When my sister and I took my children there a few years back, I couldn't believe they were still there - at least 40 years old. You raise some interesting points about how science museums will fare for the iPod generation. And I too love the displays at the Broad.

"Would such a show be more appropriate in an art museum (it apparently was in the art museum in Chicago)?"

This exhibit was not at the Art Institute of Chicago. It was however at the Museum of Science and Industry last summer.