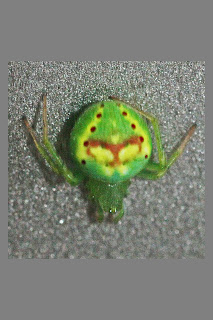 As a youth, I was fortunate enough to spend four summers working as a camp counselor. Three of those were spent in the Nature Department, performing all sorts of environmental education functions (one year I taught archery).

One of my enjoyable duties was to wander the wilds of the camp looking for interesting living organisms to put in our terraria and aquaria, a job I relished -- though the campers could often top me for interesting (I never could find a stick insect, but we rarely lacked for one).

During one of those forays, most likely in my favorite sport of hand-catching of frogs, I stumbled onto a patch of a plant I did not recognize. I still remember it rather well -- perhaps because of the small itchy welts it raised on my unprotected legs. No, not nettles (we had plenty of those, and I often stumbled into them when focused on froggy prey), but rather a vining plant with light green triangular leaves about 5 cm on a side. Indeed, the leaves were nearly equilateral.

So, I took a sample back and poured through our various guides. Now, in an ideal world you would have a guide to every living plant expected in that corner of southeastern Pennsylvania -- which might be a tad tricky as we were on the edge of an unusual geologic formation (the Serpentine Barrens) which has unusual flora. But in general, such general plant guides are hard (or impossible) to come by. What I did have was a great book of trees -- but this wasn't a tree. I had several good wildflower books -- but I saw no blooms. I couldn't find it in the edible wild plant books -- so it was neither edible nor likely to be mistaken for one (rule #1 of wild foraging: never EVER collect "wild parsnips" -- if you're wrong they're probably one of several species which will kill you; if you are right and handle them incorrectly the books say you'll get a vicious rash).

But, being a bit stubborn, I didn't give up -- I kicked the problem upstairs. Partly, this was curiosity -- and partly dreams of being the discoverer of some exotic invader. I mailed a carefully selected sample of the plant along with a description to the county agricultural agent. At the end of the summer, I contacted him (I think by dropping in on his office). He was polite -- but politely stumped as well. So much for the experts.

I'm remembering this & relating it because I've come into a similar situation. My father, who is no slouch in the natural world department, spotted this "green krittah" (as he has named it) on his car last summer. Not recognizing it, and wanting to preserve it (plus, he is an inveterate shutterbug), he shot many closeups of it (the red bar, if I remember correctly, is about 5 mm) -- indeed, being ever the one to document his work he shot the below picture of his photo setup (the krittah is that tiny spot on the car). He even ran it past my cousin the retired entomologist, but he too protested overspecialization -- if it wasn't a pest for the U.S. Navy, he wouldn't know it. At our holiday celebration he asked if I recognized it. I didn't, but given this day of the Internet & my routine use of search tools, surely I could get an answer?

Surely not (so far). I've tried various image-based searches (which were uniformly awful). I've tried searching various descriptions. No luck. Most maddening was a very poetic description on a question-and-answer site, seemingly my krittah but far more imaginative than I would have ever cooked up: "What kind of spider has a lady's face marking it's back? Name spider lady's face markings and red or yellow almond shaped eyes?". Unfortunately, the answer given is a mixture of non sequitur and incoherence -- plus I'm pretty much certain this krittah has 6 legs, not 8. Attempts to wade through image searches were hindered by too few images per gallery and far too few completely useless photos -- of entomologists, of VWs, of spy gear & rock bands & other stuff. I've even tried one online "submit your bug" sort of site, but heard nothing.

I've also tried various insect guides online. The ones I have found are based on the time-tested scheme of dichotomous keys. Each step in the key is a simple binary question, and based on the answer you go to one of two other steps in the key. A great system -- except when it isn't. For one thing, I discovered at least one bit of entomological terminology I didn't know -- so I checked both branches. That isn't too bad -- but suppose I hit more? Or, suppose I answer incorrectly -- or am not sure. It took a lot of looking at Dad's fine photos to absolutely convince myself that the subject has only 6 legs (insect) and not 8 (mite or spider). It also doesn't help that some features (such as the spots on the back) appear differently in different photos. More seriously, the keys I found almost immediately are clearly assuming you are staring at a mature insect -- if you are looking at some sort of larvae they will be completely useless. So perhaps I'm looking at an immature form -- and the key will not help any. In any case, the terminal leaves of the keys I found were woefully underpopulated.

What I would wish for now is a modern automated sketch artist slash photo array. It would ask me questions and I could answer each one yes, no or maybe -- and even it I answered yes it wouldn't rule anything out. With each question the photo array would update -- and I could also say "more like that photo" or "nothing like that photo".

Of course, Dad could have sacrificed the sample for what might seem the obvious approach -- DNA knows all, DNA tells all. That would have nailed it (much as some high school students recently used DNA barcoding to find a new cockroach in their midst), but I think neither of us would want to sacrifice something so beautiful out of pure curiosity (if confirmed to be something awful on the other hand, neither of us would hesitate). Alas, in the mid 1980's I didn't think that way, so I don't have a sample of my vine for further analysis.

If anyone recognizes the bug -- or my vine -- please leave a comment. I'm still curious about both.

No idea, but this seems like an interesting lead.... a part of a beetle?

I enjoy your blog and check it regularly. Thank you for your interesting posts! Randy

Hi, I suppose you have already seen all of these, but I want to share my search results.

I think yours has lost some legs.

I guess it is most similar to the genus: Araniella

Here are my links.

Halfway down the page.
http://www.simplegiftsfarm.com/spider-pictures.html

Much like this one with its front legs pulled off.
Notice that yours also has the same dots that this has above its front legs, and yours has arms in the same position and layout.

Thanks for all the tips. It is definitely looking like an Aranella.

Uru'Kai's URLs don't seem to show up correctly; here they are in unmangled form
SimpleGiftsFarm,Wildlife Ranger and Garden Safari

Beer Books & Bioinformatics comment (fixed URL) tweaked me to post one photo to bugguide.net, where similar responses are coming in (krittah is probably a slightly damaged Araneus bonsallae) -- clearly this is the go-to site for arthropod identification!

I have no clue of spiders, but to me this guy looks suspiciously like pictures of Araneus cingulatus
like this one

Also check this spider, (scroll 80% down the page), it looks even more similar to yours and has been identified as Araneus cingulatus as well.