I'm definitely not volunteering for sample collection on this project 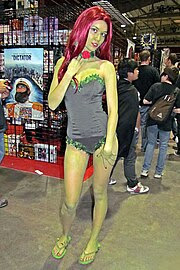 My post yesterday was successful at narrowing down the identity of the mystery creature to a spider of the genus Araneus. Another victory for crowd sourcing! It also points out the value of questioning your assumptions & conclusions. My initial thought on looking at the photos was that the body plan looked spider-like and details of the head and abdomen sometimes pointed me that way -- but then the lack of eight legs convinced me it must be an insect (I thought I could count six in some photos).

One of the commenters addressed my mystery vine with a suggestion that underscored a key detail I inadvertantly left out. The vine raised welts on my legs when it grabbed me -- not in some exaggerated sense, but it definitely had some sort of fine projections (trichomes?) which were not what I'd call thorns, but which stuck to me (and my clothes) like velcro & left behind the small red welts.

The commenter asked if it could have been poison ivy, and I must confess a chuckle. I know that stuff! Boy do I! I've gotten that rash on most of both legs at one point, and all over my neck and arms another time. Numerous cases on my hands over time. It's definitely a very different rash -- much slower to come on, much more itchy with huge welts and very slow to disappear. My clinging plant's rash was short lived.

Poison ivy is easy to identify too. It's truly simple. First, you can start with the old saw "leaves of three, let it be". But, a lot of plants have leaves divided into three parts. Some are yummy: raspberries and strawberries. Others are pretty: columbines. And far more. Also, sometimes it's hard to count -- what else could explain the common confusion of virginia creeper (5-7 divisions) with poison ivy.

Now, this is the pattern where I grew up; my parents joke that it is the county flower. Here in Massachusetts, I don't see quite as much of it and it is very patchy. Wet areas are favorites, but there are also huge stands in non-wet areas. Landward faces of beach dunes are a spot to really watch out for it; Cape Cod is seriously infested.

While it causes humans great angst, poison ivy berries are an important wildlife food source. Indeed, at our previous house I had to be vigilant for sprouts along the flyways into my bird feeder. I've never seen Bambi or Thumper covered with ugly red welts; I'm not sure of the actual taxonomic range of the reaction to the poison (urushiol). Could it really be restricted to humans?

So, here you have a plant which thrives in many ecological niches, is important ecologically, a modest to major pest (inhalation of urushiol is quite dangerous & a hazard for wildfire fighters), an interesting secondary metabolites, and is related to at least two economically important plants (mangoes and cashews, which should be eaten with care by persons with high sensitivity to urushiol). Sounds like a good target for genome sequencing!
Posted by Keith Robison at 10:58 PM

Well, I'm glad the suggestion raised a chuckle at least!