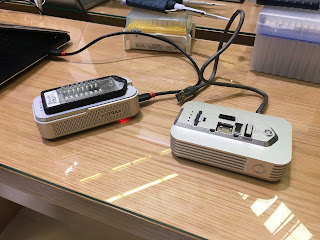 The VolTRAX you can now order for $8K promises "automatic sample extraction and library preparation", but the only kits planned for the launch is a version of the rapid 1D and a barcoding version of the same, with up to 10 barcodes.  The copy mentions that the built-in capabilities include thermal cycling for performing PCR, magnetic bead separation and a "light sensor element suitable for DNA/RNA QC", but it isn't clear any of these are being used in the initial launch.  One doesn't just get the device with the starter pack -- it will arrive with 4 sequencing kits and the 4 cartridges needed to run them, plus 6 MinION flowcells (which is a bit curious appearance of the "hot dogs and buns" situation -- why 6 flowcells for 4 kits?).

A video shown at the meeting offers one possible use case.  An ONT employee spots animal pellets on her way to work and decides to determine the species.  So she brings a backpack lab one day and sets up on a picnic table.  Said lab includes a full rasher of pipettes (kvetch of the potential hobbyist -- why must MinION require every size of micropipettor?), DNA purification columns, a VolTRAX, a MinION and a laptop.  After purifying DNA, a few pipetting steps and the VolTRAX is off and then she loads the MinION and soon finds an answer -- rat droppings. 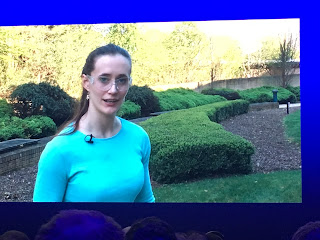 Now, even with the sped up video there were a bunch of things left out or questions left unanswered.  Such as the VolTRAX library prep requiring 45 minutes of wall clock time.  Or how populated is the WIMP database for miscellaneous wild rodent species?  Or does this really compete with Ubikwibipsy (zipsy?) for this application -- though conversely do you really want to be vigorously shaking a soup of rodent droppings and potentially aerosolizing any nasties within?

I've seen some tweet online that they expect VolTRAX to take over library prep duties, but at this stage does it really improve on ease-of-use or skilled labor time over the Rapid 1D prep?  Oxford has in the past claimed that results are better or more consistent with VolTRAX than manual preps, but that really needs to be proven out.

But, the promise.  For example, what if the VolTRAX Rapid 1D included a serious DNA repair step, which typically adds multiple pipetting steps and at least one bead cleanup.  Or the RNA or cDNA preps make it on.  Those start sounding more interesting.

There was at least in the air the idea of even more elaborate protocols.  For example, one could capture individual cells in droplets and then lyse them and merge with other droplets to provide barcodes and tags.  Of course, ONT would need to break out beyond twelve barcodes for this to get interesting for single cell -- and there is the challenge that the VolTRAX chips have only 15 inlet ports for reagent additions.

Activating the PCR component could be very interesting.  I'm spitballing some ideas with a local educator for an in-class MinION demonstration, and connecting sequencing with PCR is appealing.  16S sequencing out of environmental samples?  Sequencing the PTC tasting alleles they amplified from their own spit?  Or perhaps an organism "barcoding" (gad that word is overloaded with meanings!) to play "what's really in the seafood salad today"?  Of course, there's still the question of upstream sample prep -- none of those ports look promising for stuffing in a bit of sashimi.

However, it was Clive's bit on VolTRAX at the end of his talk that provided a really out-of-the-box vision.  Clive had pointed out early on that a key strategic shift at ONT had been to decide to ship MinION flowcells which have pores already ready-to-go, rather than having customers form bilayers and insert pores.  But the know-how for forming pores on the fly has remained, so what if pores were formed between two droplets within VolTRAX?  And what if a portion of the VolTRAX chip borrowed the crumpet design from Flongle, enabling droplets parked over these regions to generate sequence on the device?

Clive spun out multiple intriguing scenarios.  The same templates might be sequenced once and then sequenced again, by making the output droplet of one pore setup detach and become an input for another formed bilayer.  The second stage might have a different pore with different properties (more on this in another post).  Or perhaps contents of value could be parked for later retrieval.  Or maybe single cells would be lysed and then docked with a sequencing setup, enabling single cell sequencing with no barcodes.  This all went on while a video of droplets docking and undocking was playing.

Of course, this is all castles in the air at this point -- and it's taken about three years for VolTRAX to go from concept to an (almost) launched product.  So don't count on getting one even next year -- but given ONT's track record of eventually delivering on crazy technologies, don't write it off as absurd hokum either.
Posted by Keith Robison at 11:18 PM