I, and many other people at the meeting and elsewhere, are very excited about Flongle.  The obvious source of excitement is the lower cost per flowcell -- perhaps $90 in sufficient quantities.  But as I saw them demonstrated and handled them, it is the much simpler processing of the devices that I think will make them hugely successful.

What I mean is that Flongle repairs two of the aspects of MinION that require advanced pipetting skills.  It's not just that eliminating these will enlarge the potential user base, but also it will make using the devices faster for even those with the skills.  What I'm referring to are the priming and loading steps, which can certainly trip up a novice .  Priming is required to flush the storage buffer and consists of two pipetting steps separated by 5 minutes, and offers the opportunity to introduce devastating bubbles,  There's also the need to carefully eliminate any bubble at the loading port.  After all that, one must load the library beads onto the flowcell by dripping the sample at precisely the right speed -- too slow and the beads pile up at the loading port, too fast and potentially some of your sample is left atop your flowcell.

Flongle fixes these.  While the flowcells demoed on the show floor apparently still require priming, the all-but-promise is that shipped flowcells will be no priming (which by-the-way, is one of the undelivered promises from last London Calling that I failed to flag in my preview piece).  Second, the SpotON port on the Flongle for loading the sample has a little molded cup surrounding it, so one can just load the cup with a simple fluid ejection from the pipet and the sample flows into the device on its own.  Plus, the port is protected in shipping by an adhesive tab that is designed so that when it is pulled back so is the fluid in the port -- eliminating the need for the user to draw that back carefully with their pipet.  So rather than requiring an extra five minutes of priming and several very careful pipetting steps, Flongle looks like it will be "dump the sample on and go!".

A bonus is that since the flowcell lacks any electronics of its own, it is truly disposable -- no more washing the flowcells and returning them to ONT.  So the "crumpet" flowcell design not only saves money, it eliminates a tedious after step.  ONT did not mention whether they'll still require the slightly tedious before step -- running "Check My Flowcell" on every flowcell within ten days of receipt, or no replacement of bad cells.

All of this together is important if Flongle is to really take on broad use in molecular biology labs.  The 0.5-1 gigabase initial projected output for Flongle is potentially valuable for many applications in synthetic biology, such as verifying constructs or sets of library barcodes.  But to infiltrate widely in the lab, eliminating barriers to use -- which includes any pre- or post-experiment inventory complications -- is key.

Flongle already has much interest within the community for library analysis and sample prep optimization, particularly for the PromethION crowd.  After some of our internal experiences, the idea of a small, cheap flowcell for testing samples that seem to like to destroy pores is certainly very attractive.  There's also the attractive possibility of Flongle for education, since as noted above novice users are also very likely to destroy pores with the current setup.  However, ONT's initial pricing proposals do have a sizable minimum buy -- $5K for the adaptor and 48 Flongles -- which will be a hinderance for many educational groups and for the hobbyist market.

When will Flongle be a real product?  ONT announced that just after the meeting the invitations for the beta test would go out; apparently mine is misdirected to another email address.  Launch is planned for the fall, and ONT is confident that they will hit this target.

Flongle accomplishes all this with a little array of floating contacts, with a prominent "do not touch" label (which, unfortunately, tends to amplify any urge to do so!).  The flowcells aren't physically much smaller than the MinION cells, so clearly any SmidgION cell will be significantly different.  In his always entertaining talk, Clive damped down on SmidgION, saying he can't see moving forward on it until one can eliminate the need for molecular biology gear in the field. 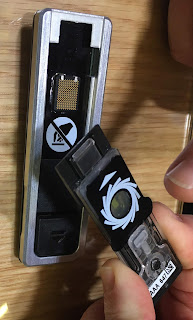 It was a bit curious that Clive should downplay SmidgION so much, as during his presentation a live demo showed proof-of-concept for the required prep.  Early on, Clive spit into a small device and handed it to a member of the ONT team, who moved off to a stage corner.  But then later, we heard, as Clive described it, "Ruth shaking the maracas".  Finally, she twisted off a bit of the thingie and parked it atop a flowcell and before long What's In My Pot confirmed, among other things, that Clive is indeed human. 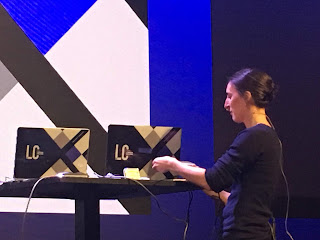 This is Ubik, short for Ubiquibopsy or Ubikwipbopsy, the output of Project Zumbador.  I liked the old name, but CEO Gordon Sanghera hated it and used the best office space in the new ONT building as leverage to get Brown to abandon his Spanish hummingbird (well, that's what they're claiming).   Demonstrated on stage, and also in the Live Lounge, were actually multiple interesting technologies.  The Ubik device itself is at the current stage a prototype that looks suspiciously like a centrifuge tube with part of a pipette tip glued to one end -- which is what Ruth confirmed.  Yes, it's a prototype -- but with no exotic materials (surely ONT has access to vibranium).  A pair of steel balls in the tube generate the maraca beat if given a good shake, but more importantly help break up gooey samples and keep things mixed.  It's not intended to bust open really difficult stuff -- ONT is currently aiming for body fluids and E.coli cultures and such.  Breaking off a bit enables the DNA-bound beads to drop out of the device and onto the flowcell loading port -- again, here's that value from the Flongle loading cup, which is what this intended to work with.   And that's right, DNA-bound beads drop into the flowcell -- the library preparation occurs inside the flowcell using a version of the rapid chemistry. 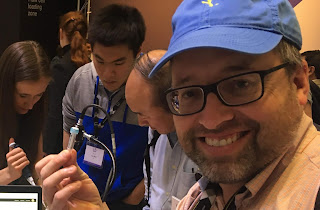 I realized after all the demos were done that I hadn't looked at the yields or read length characteristics, nor was ONT talking much about them.  But for Ubik applications, those stats are largely beside the point -- what matters is delivering a result in short order.  ONT claimed that they could see differences in Clive's oral microbiome between before and after some recent dental work and accompanying antibiotic therapy.  In a lab setting, with the right software, such a device might rapidly prove whether a complex construct truly assembled correctly.  In a classroom, any kid who can spit and shake a rattle could potentially run sequences.

One conference participant did bring up in conversation the potential for this to be a little scary.  If someone can sneak a hundred microliters or so of saliva -- or perhaps some other fluid -- and sneak away for the not-at-all-clandestine bead shaking step, they could read out an id on anyone.  Or perhaps detect something scary whether real or not -- anthrax on the subway!!!!

No pricing or launch schedule for Ubik was discussed, or which version of the name will be favored.  Ubiqwibopsy is clever, but a bit of a mouthful.  On the other hand, Ubik is also a Phillip K. Dick novel which is described as extremely disturbing -- as well as being a cryptocurrency.

Speaking of currency, Clive floated a concept that ONT will launch a system of credits so that users can pay for analyses.  He also promised that somehow all analyses would be locally-runnable on the MinIT informatics appliance, for which ONT is now taking pre-orders.  Details of how these would each be accomplished were a bit minimal. But these "Metricoins" would come with each flowcell.

Next up: updates on VolTRAX.
Posted by Keith Robison at 11:20 PM