Two Museums Guaranteed to Fluor You

I've been horribly neglecting this space for an extended period.  Contributors to that include a TNG eclosing from high school, ferrying grandparents, a milestone (or is it millstone?) birthday and a 10 day vacation with poor Internet service.  Oh yeah, another one of those starts Thursday.  Then there's keeping the genome factory going -- at times I feel like a worker in Fritz Lang's Metropolis.  But someone even noticed and emailed me today whether this hiatus would end, which is beyond reason enough to get going.  But tonight's entry has nothing really to do with biology or genomics, but rather hearkens back to the first science I fell for.When I was a kid, I started collecting rocks.  The hobby eventually faded to the background, but I retained a life-long love of mineral exhibits.  Good museums label the geographic source of their samples, mostly scattered around the world.  But there are some locations which show up recurrently due to particular mineral richness.  If I ever get to Australia, for example, I'll want to go see Broken Hill District, as I've seen that on many a label.  There's a region in Arizona that is endowed with beautiful azurites and malachites.  There's even one spot less than ten miles from where I grew up, Tinker's Creek, that has more than a few samples in many collections.  But just a bit farther away, in New Jersey, was a particularly special locale, as the samples would inevitably be tucked away in a small room or case -- which always had a switch or button.  Said button would change from white light, in which the small samples were relatively nondescript, to fluorescent lights to put on a brilliant show.  And most, if not all, of the samples in those cases hail from Franklin New Jersey -- and are minerals found nowhere else on Earth.

Now New Jersey is a state that often gets little respect.  Mention it, and many will think of the Elizabeth Seaport, Newark Airport or other industrially-scarred Meadowlands.  Or of weathered honky-tonk joints on aging boardwalks.  I married into New Jersey and make multiple trips there, and while there are those and the general suburban sprawl, it does have other aspects.  For example, my in-laws live near what is probably the largest public demonstration of the flammability of hydrogen.  But there are many charming areas too -- I once had the pleasure of an early morning bike ride through the pinelands and cranberry bogs of South Jersey.  And Franklin is yet another world altogether -- almost mountainous and completely wooded.

There are two mining museums in the Franklin mining district, and I've finally gotten into both of them in the last several months.  Only time I got to the area before was on a Boxing Day, when everything was closed.  If you go, and it's less than two hours from New York City and a bit further from Philadelphia (and alas, you must drive -- no public transit nearby), be sure to check the hours.

The smaller and more frequently open museum is the Franklin Mineral Museum.  It has some nice, if underexplained, rock collections and a small simulated mine.  There's also a nice shop giving the opportunity to acquire specimens.  You can pay to prospect some mine heaps, though when I went in March this was closed due to snow cover. But the showpiece is the fluorescence room -- instead of a tiny cabinet there's about a thirty-foot long one, and some of the samples are bigger than milk crates. 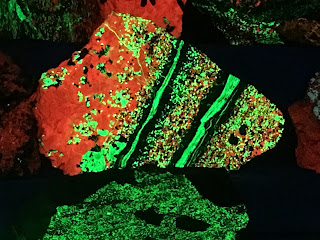 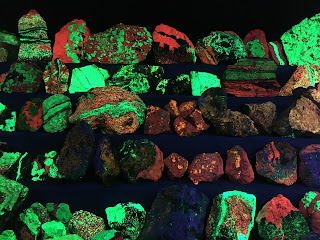 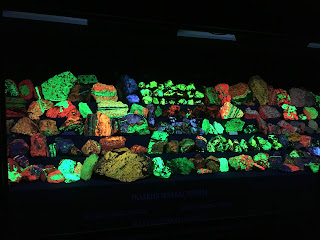 As much fun as the museum in Franklin is, slightly to the south in Ogdensburg is the even better Sterling Hill Mining Museum.  Now, one quirk is that the tour is once a day -- on the days it runs.  Also, strangely the gift shop closes before the tour ends, so if you want some specimens buy them first.  There's some small external displays and such, but the centerpiece is that tour so make sure you catch it.  It starts in the former changing house which is now a mineral museum -- with a not shabby case of fluorescent minerals but also lots of giant samples.  Then you are led into the actual mine!  Most of the levels are flooded, but the mine was poked into the side of a hill so the uppermost level stays dry.

How serious are they about running a good exhibit?  Well, after the mine closed the operators realized that there were multiple regions now now connected -- so they blasted new tunnels for the tourists!!  We were even lucky enough to meet one of the miners, who explained how he did his job of checking the integrity of the ceilings each day.  After seeing some remaining mine equipment, you go into one room and they kill the lights -- and with UV not only do some huge samples glow but so does an arc in the wall! 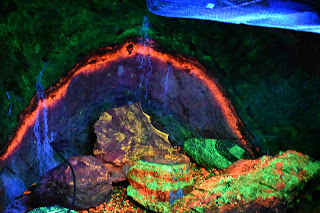 I've actually gotten the rock bug again -- there's a local jewelry chain that also sells samples and I found myself buying a quintet the other day.  One more distraction to keep me away from blogging!

Well, as I mentioned I offline for almost two weeks.  But when I get back, I promise I'll start unburying the various leads and drafts that are stuck in limbo.

Accidental Boy has thoughts too. . . said...

Where'd you go man... there hasn't been a blog in like forever

Accidental Boy has thoughts too. . . said...