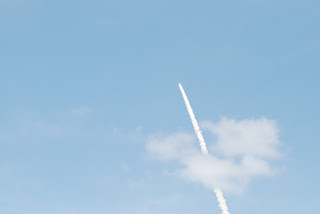 I've only seen it a few times, but the sight of the iconic cavernous building always makes my heart race. But this time even more so, as it meant the end of a race against the clock. We had reached our position for the big event with just minutes to go.

Attempting to be speedy but efficient, I assembled the fancy digital SLR rig atop my tripod. Except it wouldn't work. Removing the tele-extender restored autofocus (in retrospect, probably applying another newton of force would have too) and then I got the camera in the wrong shutter mode -- timer instead of multi-fire. A cheer rises from the crowd and the dark smudge to the left of the building emits a shape trailing a brilliant blaze of red-orange, a color which no photograph seems to capture remotely well. Below that is a growing, intricately braided cloud of smoke. I don't get my camera remotely under control until it is tilted about 45 degrees, and only then do I realize that in my fumbling I had it at minimum zoom! A photographic opportunity dreamed about for nearly a quarter century almost utterly botched! The crowd's sound builds again as the rumble of the engines finally reaches us.

But, I was there. We all were -- TNG will remember it for his entire lifetime. Atlantis punched right through a cloud (don't believe the reports of a cloudless sky!) and soared. All too quickly it was out of sight, leaving for many minutes the detailed smoke tail.

Our plans had been too optimistic, trying to squeeze the trip in with minimal disruption of other schedules, plus a final hesitancy to pull the trigger on plane tickets. What seemed like a plan with a little room for delay was undone by a rental car company that apparently stocks the break room with Protoslo and a traffic jam stretching from Orlando International Airport to the Cape.

I grew up with Apollo. I remember the last moon launches and moon walks. I do not remember the early manned Apollo missions, though I was technically around for all of them. Indeed, it is a great disappointment to me that none of those who could remember can remember if I was toddling in front of the TV when Neil Armstrong made his first steps. I devoured all the books in the school library and then the public library on space and watched many an early shuttle launch and landing (we had a school assembly for the 1st landing!). I remember precisely what I was doing when the news of Challenger's loss came & again with Columbia. I sometimes dreamed of being an astronaut, though never enough to force my academic path in that direction -- but I certainly spent more than a few times in bed before going to sleep as a kid on my back with my knees bent, imagining what liftoff must feel like (I still sometimes close my eyes on airplane takeoffs to try to return to those youthful fantasies). But I had never seen a launch. There are the near-mythical VIP tickets my family once had for a payload my father worked on, but that would have launched in May 1986. After the Challenger-imposed hiatus, somehow we didn't get the tickets again.

When I announced to some of my co-workers that I might try to go for this launch, I got a lot of support. That camera was a very generous loan from one colleague. But the most interesting reaction was the number of individuals who were shocked that the shuttle program was coming to an end. "What do you mean the third to last flight?". And it hit me -- for many of these folks, the shuttle IS the manned space program simply because it is older than they are.

I have a complex love for the shuttle program. It is one of the most amazing devices ever realized from human imagination. It is capable of so much and has contributed so many wonderful images. But it is also a mishmash of design requirements, resulting in a tool not optimal for any task and a design which has proven deadly twice and nearly so on other occasions. The shuttle also sucked so much post-Apollo, post-Vietnam funding that could have gone into some spectacular unmanned missions.

But now I have finally seen a launch. It is spectacular, and I am hungry for more. Alas, I wasted my youth in not making plans and now have that laundry list of responsibilities which come with adulthood. We were lucky that the launch occurred precisely on schedule; too few have stuck to their assigned time. I probably won't be able to do better than a giant screen TV for the last two -- you do get a better view, but it just isn't the same. But you can bet I'll be cross-referencing future vacations against unmanned launch schedules.

Of course, if anyone has some VIP tickets they aren't using, I won't claim I would resist temptation...
Posted by Keith Robison at 9:35 PM

I am really, really glad you guys got to see a launch in person. As gripping as even a televised launch is, the intensity, the risk and the sheer force are all brought into dramatic focus in person. My mother tells the story of how we watched the moon landing together on tv in the summer of '69 - I in all my 5 month-old glory! I remember televised moonwalks, launches and landings, and I also remember where I was when the Challenger (Chemistry class right after lunch) and Columbia (painting the youth group meeting room at our church in San Diego) were lost, and my despair over the loss of life.

Part of me still cannot believe that this shuttle program is coming to an end. I feel fortunate to have seen one launch up close - from a public road about 3 miles away and across a body of water from the launch pad - in 1995. (We lived in Orlando and got to see every launch and landing - and the telltale double-sonic-boom - for six months.) Watching the sound wave roll across the water toward us and then being hit by the sound was breathtaking! We sadly missed the February launch, for which we had tickets, when it got scrubbed for a day and we could not stay in Orlando another day. I tried without success to get tickets for last week. We will definitely go to see one (or both) of the final two launches this fall, tickets or no tickets, since we live only 4 hours away and will not be constrained by a public school schedule. (I also plan to borrow a friend's good camera to take pictures, as our just won't cut it for the occasion!) If you care to join us, you can always crash here in Georgia on your way down and/or back home!

Yup. Mrs. Kurtz bursting into Mr. Schmidt's Chemistry class & none of us understanding what she said at first. I had really hoped for a snow day so I could watch it live.

Columbia: On I-93 around Roosevelt Circle, about where the first view of Boston jumps out. I knew far too quickly what loss of radio contact meant.

I am jealous! I've never seen a launch live, and I've been a fan since the first Mercury flights (that'll date me). I watched every U.S. manned launch on TV through the Gemini and Apollo series, but sometime during the shuttle era it became ... commonplace ... and my interest waned. And now we're down to two. I'd still love to see a launch, though.