Bike in the Commuting Fold 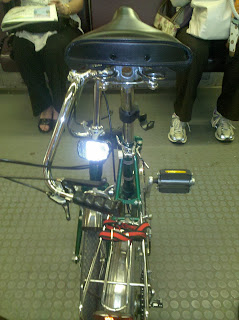 Okay, a little bragging: I biked into to work last week for Bike to Work week. I actually bike the last leg of my commute a lot of days now on a folding bike (pictured), but this was the whole enchilada on my new 24-speed road bike. By Google maps it's 23 miles each way, but with my accidental deviations the morning was definitely more like 24. I did meet my family for dinner part way home, so the last few miles were sans backpack.

I've always enjoyed a bicycle but am very sporadic about using one. My previous distance record for one day was 42 miles but that was for a charity fundraiser, was nearly dead flat (South Jersey; though we did cross the Ben Franklin Bridge first which is a climb) and my mitochondrial DNA donor insisted on regular practice runs for several weeks beforehand. This ride lacked that level of preparation, so the next day I was a bit saddlesore -- though thankfully none of my joints were complaining.

My more typical commute now is a 3-speed folding bike for the 4+ miles from North Station to Infinity. Infinity's location finally pushed me last year to contemplate this option, as it really is awkward from North Station. The choices by transit are: the EZRide bus and then a 10+ minute walk (through a pleasant neighborhood), walking or Orange/Green Line to the Red Line to Central and then walking or catching a shuttle provided by the landlord. No matter how you slice it, it is a bunch of connections and timing. Plus, the Red Line grows more unreliable and slow every year.

So last year I picked up a folding bike on Craigslist for $120. I had contemplated a bunch in different price ranges but ended up with this bike. I asked a lot of folks with bikes about theirs (there's two more in my railroad car tonight). Most folder owners are quite willing to answer intelligent questions about their gear, a practice which I try to uphold. This one was a good trial, though I am now monitoring Craigslist again looking for an upgrade -- more gears & bigger wheels please!

The T is at best lukewarm to the biking community. Most buses now have bike racks, but I haven't used them. A few stations now have bike cages which require special activation of your T-pass (or something similar), but unfortunately North Station has only an unprotected set of bike racks. The idea of leaving my machine exposed to the elements, vandals & thieves isn't pleasant -- especially since my college bike first rusted out a chain and later disappeared, though it's possible I just forgot where I parked it. Some conductors are quite nice, but one barks at me everytime I yank the bike on unfolded -- one minor issue with mine is a balky knurled nut that locks the frame. One colleague was refused entry to the subway with her's folded, which indicates not everyone at the T understands the long-time policy.

The folding bikes do have some downsides. Mine has very small (12" I think) wheels, which makes potholes and root-lifted sidewalks quite scary. For my commute I really could use a couple of more gears, for the occasional hill and to get speed on flat ground. But overall it works.

For North Station to Infinity there are two obvious routes. The fastest is along the Cambridge side of the river, but it is also narrower and rougher. The Boston side is a touch slower, but is shadier and has a higher density of dog walkers. Both offer great views of sculls and sailboats on the Charles. Both are heavily used, which is generally manageable but you are sometimes left pondering how a single runner can obstruct the path far more efficiently than a pack of four leashed dogs. Some stretches are badly lifted by roots -- and one stretch I don't routinely use upstream of Harvard Square is downright scary, with the path seriously undermined by erosion. In any case, I end up with a very predictable travel time (it's the variance which kills you when you need to catch a train!). Plus, very little interaction with Boston traffic! However, due to 2 years of a paper route I am averse to darkness and bad weather, so I all too often find excuses to skip the bike and retire it altogether during Standard Time. Plus, I do end up standing on the train more (as there are few places to store a bike -- and the seats nearby are usually taken) and so can't read or work on the commute sometimes.


The other great advantage of a bike is greater range off the commuter rail and T. I've used it for seminars and errands and meeting folks for lunch, as well as to meet family for dinner or run errands at home.

A major thought that hits me: why didn't I think about this sooner? During any of my Millennium or Codon days it would have made sense, especially in our old house where I had an annoying short drive the station (where sometimes parking was not to be had). Especially when I was at 640, the folding bike would have been great. But, I never seriously considered the idea. What an opportunity missed!

Tonight I'm going to look at an upgrade on my folding bike. A major investment in a better commute.
Posted by Keith Robison at 9:22 AM