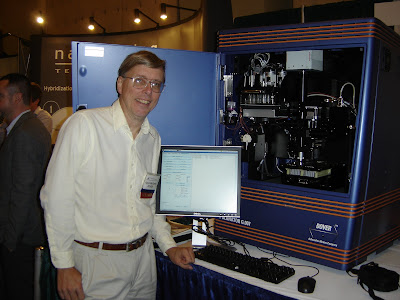 Standing next to the Polonator like a proud relative is Kevin McCarthy, who leads the Polonator effort at Dover Systems. I had remembered him giving permission to photograph it at the first day of the Providence meeting & brought my camera along the second day. When I mentioned it was for my blog, Kevin leaped into the frame. All in good fun!

The Polonator is an intriguing gadget. No other next-gen sequencer can be had for under $200K -- or about 1/2 to 1/4 the price of any of the other instruments. But it's no tinfoil-and-paperclip contraption -- not only does it look very solid & professional, with everything laid out neatly in the cabinet, but in one small test it was quite robust. Kevin had it running mock sequencing cycles and he said "if you put your hand on the stage". I thought he was being hypothetical, but then he politely insisted I do just that. Clearly he wasn't worried about anything going wrong (and somehow I was convinced my hand would emerge unscathed!). In his talk, Kevin pointed out the various vibration isolation schemes engineered in -- you need not tiptoe past it during operation, despite the fact that it is doing some amazingly high-precision imaging.

The truly intriguing angle on the Polonator is that it is a completely open architecture. If you want to play around with different chemistries, go ahead (but please respect appropriate licenses!). I'm guessing you could probably run any of the existing amplification-based chemistries on it (again, licenses might be an issue) -- presumably with a loss of performance. Of course, with 454 you need continuous watching of a small bit of the flowcell, so the machine isn't ideal. But that isn't the point -- you could use this as a general hardware & software chassis to experiment. I speculated previously that some new sequencing-by-synthesis chemistries could be run on the Polonator, and on further reflection I'm wondering if the optical-based nanopore scheme could be prototyped on a Polonator. NAR published earlier this year another proposed chemistry that would seem Polonator-friendly.

That's pretty enticing from a techie angle, but it's also a pretty risky business strategy. Generally such an expensive gadget is either paid for with a hefty markup up front and/or a hefty premium on reagents. But, while standard reagent kits are on the way, there's nothing proprietary about them. Anyone can whip up their own. Just like the hardware & software, the wetware is all open as well.

There's also the issue of the current chemistry, which appears to be the original Church lab sequencing-by-ligation scheme. That means a bunch of sample prep steps and very short reads -- 26 nucleotides of tag. The tags are derived from the original sequence in a predictable way but which isn't quite like getting two simple paired-end or mate-pair reads. That may be a barrier to many software toolsmiths including Polonator in their code, though perhaps with wide acceptance that would happen. But, with 10Gbases of data after 80 hours of running, it may attract some attention!

I'm trying to figure out how I would use one if I had one. In the abstract sense, polony sequencing has already been shown quite capable of sequencing bacterial genomes. Also, Complete Genomics' chemistry generates reads in the same ballpark and they are tackling human. But would I have the courage to try that? Certainly in my current professional situation it would be going out a bit on a limb. Plus, even at under $200K it really needs to be kept busy to look like a good buy. Does almost make me wish I was back in graduate school, as that is the time to experiment with such cool toys!

On the other hand, I do have some notions of what I might try out on one. Not enough notions to be able to justify buying one, but certainly if I could rent some time on one at a reasonable price I'd jump at the notion. With luck, a service provider or two will decide to offer Polonating as a service. Or, perhaps someone who has bought one might be interested in collaborating on some interesting clinically-relevant projects? If so, leave me a comment here (which I won't make visible) & we can talk!
Posted by Keith Robison at 10:19 PM

Email ThisBlogThis!Share to TwitterShare to FacebookShare to Pinterest
Labels: conferences

Uber cool. Thanks for sharing and good luck with those collaborations!

I doubt if many service providers will be interested in the Polonator except as a toy. Usually as a provider you wish to provide consistency to your customers. Which means getting your lab protocol, analysis technique and turn-around time down pat at at low cost without experimenting with your customers' samples. On the other hand if the price gets low enough then research labs (and thus grad students) could purchase a Polonator to play around with.