A bizarre incident happened on Twitter yesterday.  Someone contemplating using Oxford Nanopore to sequence a large, complex genome on a tight budget was asking technical questions about whether to optimize their libraries for overall yield or long inserts, and was getting useful advice from some of the top academic scientists who have propelled ONT forward.  One of them suggested using Circulomics products, and that was followed by an ominous yet vague warning from an ONT employee.  But not just any ONT employee, but Chief Strategy Officer Spike Willcocks.  Having not seen a retraction of that tweet, I'm here to point out just how self-defeating the warning is.
In case you missed the exchange, here it is 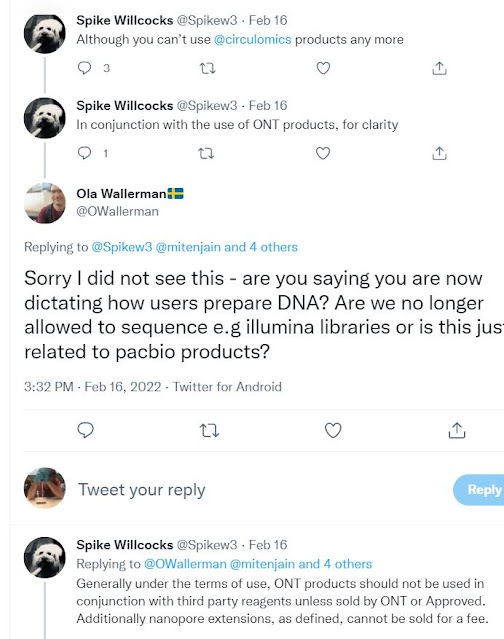 Recap: Circulomics was a small academic spinout that specialized in DNA preparation kits for generating high molecular weight DNA.  Nanopore users were much of the leading edge for these kits as they greatly improved performance and looked very automation friendly.  Other companies took note as well: BioNano Genomics switched over to Circulomics as their standard prep.  ONT even had a kit -- the Ultra Long Reads kit -- which relied on Circulomics technology.
Small reagent companies don't tend to stay independent for extended periods.  Big players like Agilent, Roche, Thermo Fisher and QIAGEN are conglomerates accreted from such companies.  But to ONT's ire, it wasn't a big reagent player that bought Circulomics, but instead Pacific Biosciences -- the other long read sequencing player.  And ONT immediately announced they would stop supporting use of Circulomics products, despite PacBio pledging they would support any and all customers.
ONT's reaction was a bit extreme then, but this newest iteration takes it to a new level of self-defeating absurdity.  Willcocks seems to be suggesting that ONT will take offense at any unsanctioned reagent used upstream..  How far upstream?  At Warp Drive we had a special media recipe for growing actinomycetes prior to DNA extraction -- would those ingredients require sanctification by ONT?  Will they be performing regular blessings of the isoamyl alcohol?  Does this pique extend to what liquid handling robots or pipet tips one can use?
There is of course long history of companies trying to lock users into their products -- IBM and non-IBM software, every inkjet printer and the cartridges, AT&T not letting you plug a modem directly in their network for decades.  There's also precedent for someone locking out the competition: after Illumina bought Epicentre they almost immediately announced that the Nextera kits for 454 libraries would be discontinued.  Sharp elbows being thrown are not uncommon in industry.
But this is radically different.  It isn't trying to force you to buy ONT products -- they don't have any in this space.  They're just declaring possible war on customers who use a competitors products in conjunction with theirs.  It's like HP saying you can't plug their printer into a Lenovo laptop.  Setting aside the possibility that this is outright illegal restraint of trade in at least one jurisdiction, it is pure marketing self-immolation.
Consider first existing customers.  They'd like to maximize their value gained from ONT technology.  But ONT is saying, "No, you can't if that means Circulomics".  And while there are other options out there, Circulomics quite possibly has the edge in terms of automation friendliness (my lab friends at least politely snicker  if I suggest we could automate the NEB Monarch kits).
Or imagine labs trying to run side-by-side comparisons of PacBio and Nanopore and perhaps Illumina Infinity or Element Biosciences LoopSeq.  Must they check every reagent?  If someone wants to convert another platform's library into a nanopore library, is that legit?
But think about an ONT salesperson's dream lead being transformed instantly into a total dud.  If a company is already a PacBio user on a huge scale and is interested in switching to ONT, but has invested heavily in automating preps using Circulomics properties, they aren't going to want to switch all their processes.  For even small companies or labs, why risk breaking something that works well?
ONT often has a pugnacious streak that borders on paranoid.  They have some good reason to be a bit jaded: Illumina tried to sink them with an investment ploy and later via patent lawsuits and an early participant in their beta "MAP" program wrote a poison-pen paper that unfairly (IMHO) maligned the platform.  And sure, the onetime CEO of Intel did write a business best-seller titled "Only the Paranoid Survive".  But certainly "constant vigilance!" should be leavened with some market awareness.
Sure, any money spent on Circulomics is potentially funding PacBio to compete better in the head-to-head matchup with ONT.  That's the real world.  And perhaps not being partners with your competitor is understandable, though the degree to which ONT work would enable PacBio and not quickly leak into the open information sphere is tiny.   And so far the technological benefits have mostly flowed the other way -- PacBio legitimized low accuracy long reads before ONT had a product and directly supported the development of software tools which could use such reads -- and made their own tools open source.  Picking off customers not fully satisfied with their PacBio experience seems like a far better growth strategy than threatening and sandbagging your own customers.
There's also the question of what exactly would ONT do if they heard you were using unapproved reagents upstream of nanopore?  Would they stop selling you product?  Slow down your deliveries even more?  Not give you technical support?  Is that really the image ONT wants their customers to have: iron fist inside a velvet glove?
As a side note, this eruption also underscores a huge change in ONT's attitudes about competition.  For the longest time they claimed PacBio was not real competition.  That changed when Illumina unsuccessfully tried to buy PacBio; ONT was among those crying foul on anticompetitive grounds.  Now it is clear that ONT views PacBio as a prime foe, not only in the Circulomics reactions but also in oblique, negative references to PacBio that pepper their London Calling and Community Meeting presentations.
It's not too late to throw a retraction out there.  Call a mulligan.  Be honest and open: competitive instinct failed to wait for marketing wisdom.  Course changes like this may be hard -- there will be egos involved -- but they are doable.  Rewinding the whole "Circulomics is forbidden" idea would be in ONT's best interest, and the sooner executed the better.  Commit to making your customers the happiest with the best results -- the money and know-how flowing to competitors will be rounding error on your profits if you take that path.
Posted by Keith Robison at 11:32 PM

"not only in the Circulomics reactions but also in oblique, negative references to PacBio that pepper their London Calling and Community Meeting presentations."

"For the longest time they claimed PacBio was not real competition. That changed when Illumina unsuccessfully tried to buy PacBio; ONT was among those crying foul on anticompetitive grounds."

ONTs objection was to Illumina becoming more competitive via its acquisition and that competition would be best served by pacb remaining independent, which the authorities agreed with. Pacb now has $1Bn in the bank and until recently was worth over $5bn, they should be thanking ONT.

It is interesting, but at the same time this article does seem like a massive over-reaction to what was probably a casual tweet.

"ONT was among those crying foul on anticompetitive grounds."
Was there actually any evidence of this, if so can you point to it? The only "evidence" I saw was on internet forums from people who were neither from the FTC/CMA or ONT (i.e. guessing / mud-slinging).

“Illumina tried to sink them with an investment ploy”

That’s an interesting take. I always thought the “ploy” went the other way around - ONT took ILMN’s money to develop a product that was almost immediately dropped in favor of a product ILMN didn’t invest in.

IDK -- it's pretty standard to state support is only for within-company products to cover for things like returns etc. I'd chalk that off as bad twitterside manners.