Reflecting on Anniversaries and Changes

As the year closes out for me (as I write this, it may well have closed out for some of you!) I'm reflecting on some anniversaries that were concentrated in this year, particularly those that are multiples of an early evolutionary developmental decision millions of years ago.
It was thirty years ago in August that I started attempting to become a computational biologist.  My first months at Harvard have left more than a little pentimento on my practices -- I'm an emacs user who can barely get out of vi, there's a single emacs macro I add every time I find a new machine that someone gave me back then and I sometimes use sed instead of Perl for simple command line edits.  There's other parts of that time I haven't stuck to -- I learned C++ but never learned to love it and it was the last language I used without garbage collection.
Twenty five years ago in October I started at Millennium, which left very many imprints on me and gifted me a gigantic professional network.  It's also interesting to see how many of the ambitions of Millennium are still ambitions of biotech companies today, and I often find myself looking at companies through that lens.  Which means we were both amazingly far-sighted but also impractically ahead of our time.
Fifteen years ago in October was the non-coincidental coupling of Millennium releasing me (to use one of many euphemisms for being laid off) and beginning to write in this space.  Millennium had a strict no social media policy about the company that didn't bode well for a blog, even if I did try to avoid company issues, so once they told me to get lost I started the blog.  Funny thing is that the two co-existed for a few months -- I was originally given two weeks notice but the connivance of a friend meant I kept being extended to try to wrap up things - -which in the last few weeks was purely a gift as what could be tidied was -- since nearly the entire department was jettisoned there wasn't much being preserved in terms of code or databases.  I wrote a lot more in the first six months of the blog than I ever did afterwards, but still the muse sometimes overcomes my inertia (like now!)
Ten years ago in September I for once left a position voluntarily and headed off to Warp Drive Bio, plunging into the uncertain world of a startup.  Starbase was loads of fun and an amazing experience in professional development and gave me great opportunity (and budget!) to actually put some ideas into practice.  There were highs and lows -- many of which more suitable for discussion over a drink than splaying over the Internet (particularly the lowest lows!) but it was a great ride with a great team.
Deviating from the modulo five theme, the saddest anniversary occurred this week -- one year since the ravages of age stole our dear little Amanda from us.  She arrived a year before the layoff-triggered-blog-launch and was critical support during that emotional time -- one doesn't sink heart and soul into an organization for ten years without a forced separation being hard on the psyche.   She was great support again when I shattered the top of my left tibia in 2012 and again when I lost my father in 2018, along with many other trials and tribulations.  She was a sounding board and a warm companion.  In at least one case I filed a patent disclosure at Codon Devices that described my process of conceiving of the idea in terms of series of waypoints along one of our nightly walks -- this idea happened at this corner and then I realized an issue at this driveway and then  resolved it at a certain park bench and so on. 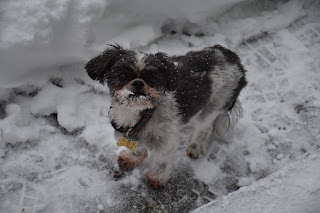 Amanda, 2005-2020
I tried to soldier on for several months without her, but it wasn't easy.  There were all those things she excelled at -- digging up leads, fetching references -- though she didn't have the temperament to hound sources.  So in June we brought in an intern named Lily and as often happens in training someone it is a bit of a roller coaster.  Young and eager and raring for action
, she has been inclined to sink her teeth into just about anything -- though after some unfortunate incidents involving a USB cable then a laptop power supply and finally a laptop screen, I've directed her attentions elsewhere.  Don't be surprised if she strays into a few pieces 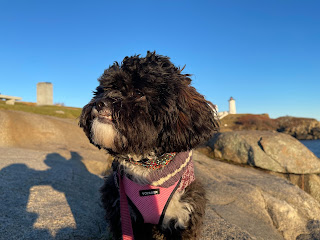 So 2021 is finally over - on to 2022.  May it be the year this viral horror finally ends.  On a smaller scale, may my resolution to post more regularly hold up for at least a few months!
Posted by Keith Robison at 8:52 PM

Hi there friend! Remarkable that your blogging journey started way back in 2006, I was too deep career-wise with moving from sunny San Diego to the East Coast, it wasn't until 2012 or so that I took the plunge into blogging, and nowadays writing for the day-job and helping others offline has been the outlet (and the intrinsic reward).

As another year begins I wish you and your family the best, will be headed into Waltham with a bit more frequency in 2022 for sure, and we'll get together again in Cambridge for more long conversations about history, books, scouting, and every so often whatever is going on in genomics, bioinformatics and now proteomics.

This is great information .its really helpful for me .Thanks For Sharing with us .please kindly visit my site about
accounts in barking