AGBT21: The LabRoots Presentation Platform is an Unmitigated Disaster

Rant is ON! I've been having an utterly miserable experience with the LabRoots conference software that AGBT is using for their virtual meeting.  This year has exposed many of us to a wide variety of teleconference and virtual meeting software and many of the glitches are small and hard to pin down.  Or matters of personal preference (though if you don't share mine, you are simply wrong!).  But now on two major platforms I've come across major issues with LabRoots
During the pandemic I'm usually on my couch with my computer in my lap -- there's a horribly vacant spot next to me where there should be a dog but that's a different sad story.  I'm viewing content on my PC or on an iPad Pro.  The latter is particularly useful for anything that I want to zoom in on -- which is all too much these days given eyes that were never good and have just gotten typically worse in the last decade.  Graded lenses help, but nothing beats pinch-zoom!

LabRoots on a PC Is Bad

I was first trying to watch on the laptop, because it is a bit more comfortable -- I really haven't figured out a great solution to propping up the iPad on my lap and that large screen that is good for my half century old eyes isn't appreciated by my wrists of similar vintage.
Many of the features work passably on the PC, though it the amount of screen space devoted to folderol and accompanying white space is distressing.

A lot of attention has gone into providing the experience of a conference -- you have various "booths" for the sponsors.  But I wonder what a sponsor thinks of their literature links being blocked by another sponsor's ad?  Or the Helpdesk button which not-so-helpfully will perform the same occlusion periodically

But wait! It gets worse.  As someone who paid real money to attend -- and the system is extremely diligent about making sure I have only one session going at a time -- I'd like to, y'know, watch the talks.  And that is not a fun experience.
First, you must click on each talk.  There's no real concept of a session that you can just stay in and watch a set of talks in series.
But worse, try actually seeing the slides! Here is the default view 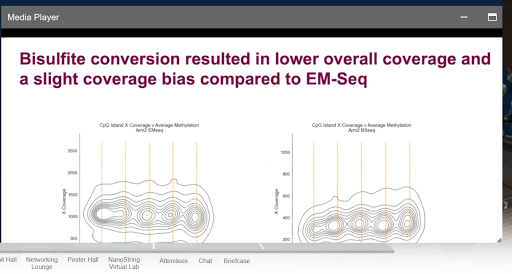 There's a helpful little drag thingie at the bottom -- that resolutely refuses to cover all that banner junk.
What if I click that maximize icon?  Now I can finally see the whole slide -- as a tiny little frame amidst a sea of junk (apologies to my friend James Hadfield for using his nice data to illustrate a lousy interface)

I found one other way to view the whole slide that seemed nice -- I could even see the speaker side-by-side -- but every time the slide changed my setup went away.

LabRoots on an iPad Pro is Utterly Unusable

Having been frustrated there, I tried switching to the iPad.  Huge mistake.
I've thrice tried joining a talk that was in progress.  Once it just showed me the speaker's final acknowledgements slide the whole time; the other two it was permanently asking for my patience while it connected to the presentation. Well, at least I could hear the talk!
Similarly, there is a "Briefcase" I'm still figuring out -- partly because if I connect on my iPad I get a permanently spinning (lack of) progress wheel 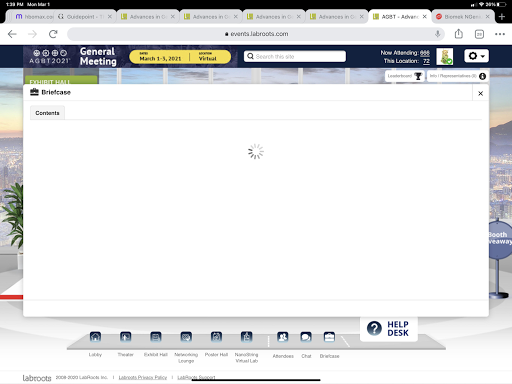 Maybe I should relax by reading some posters.  Well, that gives something that utterly mocks my vision issues  and desire to see the posters. Yeah, that is the poster at the top - not an icon, but the whole panel for viewing it. 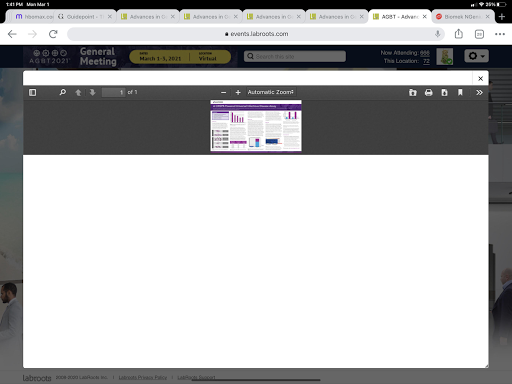 I have succeeded in viewing recorded talks on the iPad, though I find the lack of an actual scroll button a challenge - -and please people, put in a back-10-seconds button on all such viewers!
I can understand that getting such tools to work on the myriad of platforms that exist is a challenge -- but dammit Jim that is what these companies are paid to do.  I'm not trying to view the data on a VIC20 -- these are modern, high volume computing devices heavily used by the target audience for this conference.  If you are a Mac user, then be grateful -- borrowing TNG's MacBook Pro proved that indeed everything actually works somewhere. We no longer have any working Android devices so I can't test that platform, but my Bayesian prior is that it will also be the dog's breakfast given bad behavior on 2/3 of the other platforms.
Update: A phone call with LabRoots revealed that setting the browser magnification to 70% fixed most of the PC-side problems.  But no fix for the iPad problems -- they're baffled.

Posted by Keith Robison at 2:50 PM