10X Genomics had an online event Wednesday called Xperience (as far as I could tell no Jimmy Hendrix music was used, a missed opportunity!) to lay out their development roadmap.  This largely paralleled the presentation given at J.P. Morgan, but there were a few new bits and of course much more technical detail to whet the appetites of scientists -- and judging from a number of very positive tweets I saw today they were successful in that goal. Some of the 10X management was kind enough to walk me through the deck earlier this week as well as permission to borrow images from it, so this summary is based on that as well as watching the presentation.  While their name is 10X, the company emphasized progress on three axes: scale, resolution and access and that progress across the three different platforms.
10X emphasized that they are pushing three platforms forward: the Chromium line for operating on dissociated single cells, Visium for untargeted two dimensional expression profiling in tissue samples and their In Situ line (unclear if that is the final moniker, though I doubt it) to precisely localize pre-specified targets at subcellular resolution.  Chromium and Visium are being pitched as broad discovery tools, able to profile whole transcriptomes, whereas the In Situ application is seen as a way to test hypotheses at extremely high resolution.

The applications that really wowed me is the BEAM-T and BEAM-Ab applications on the Chromium line for immunoprofiling.  The COVID-19 pandemic has driven genomic epidemiology of SARS-CoV-2 into the major news media headlines almost daily, with the huge question hanging of how much do these variants impair the immune response in vaccinated or convalescent individuals. BEAM-Ab maps specific antibodies to antigen targets by tagging the antigens with oligonucleotides and then mixing those with Peripheral Blood Mononuclear Cells (PBMCs) or lymph nodes from immunized laboratory animals.  An optional sorting step to isolate only those cells which have bound antigen improves downstream sequencer efficiency.  The cells are then encapsulated and 10X's chemistry generates sequencing libraries so that the antibody gene segments and antigen tags from the same droplet will carry the same barcode.  In a "Wow!" slide from the deck, this approach was used to map antibodies from convalescent patients onto the SARS-CoV-2 spike protein, parsing many of the antibodies into which portion of the spike they bind to.  It is easy to imagine both using this to map specifically which antibodies are perturbed by some of the worrisome spike protein mutations as well as feeding all this data into machine learning algorithms to better understand antigen-antibody interactions and how to design such. 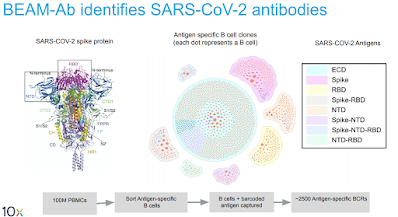 BEAM-T is an analogous assay scheme for peptides and T-cell receptors.  10X this January somewhat quietly acquired a Danish company, Tetramer Shop, which has developed a means to load peptides onto MHC molecules bound to scaffolds, enabling simple and rapid display of oligo-tagged peptides in a context for appropriate T-cell binding.   T-cell immunity evoked by COVID-19 vaccines is a hot topic as well as the potential resilience it offers in the face of the variants; BEAM-T would appear to be a powerful approach for dissecting this. Both of these assays will be supported as automated workflows on the Chromium Controller and Chromium X.

Making A Hash of Drug Screening

There have been a number of attempts over the years to apply expression profiling to many samples in parallel, with possible application to drug screening.  Back in Millennium days I got to hold an Illumina bead array mounted on 96 pins; I was mesmerized by all the beautiful diffraction patterns.  Various other schemes weren't nearly as beautiful to look at, with all sorts of schemes for multiplexing many samples for targeted panels.  None have caught on to my knowledge.
10X showed slides using their CellPlex reagent based on lipid-linked oligos to screen small panels of compounds across two cell lines and multiple time points.  This enables tagging either cells or nuclei so that their well on the original plate has a unique barcode in the reads.  With twelve conditions per compound each receiving a different CellPlex barcode, they can be combined into a pool for a single encapsulation operation.  In total 96 samples  in a single sequencing run  Definitely worth seeing the video of this -- the left-most image is a still which in the presentation was spun around.  In any case, the idea of simultaneously profiling multiple drugs against cell types with a rich (but targeted) single cell expression readout is extremely intriguing, enabling viewing response heterogeneity within the cell populations.  We had a project at Infinity profiling two compounds that had different phenotypes but differed by a single methyl group; boy would this have been fun to throw at that problem!

As noted from the JP Morgan talks, 10X is offering their Chromium audience expanded opportunity for both fewer droplets per sample as well as much broader coverage for very detailed expression atlases of complex tissues.  The "Low Throughput Kit" is intended to enable pilot experiments to range on correct variable choices; the Chromium X and "High Throughput Kits" arriving in the second half of the year will enable encapsulating huge numbers of cells in a single run and a timely manner -- one doesn't want t-SNE plots that cluster cells on what time in the run they were encapsulated! Chromium X will enable "routine" profiling of 1 million cells per experiment and will be enabled for both general gene expression as well as immunoprofiling at that scale.

CRISPR Screens: Both Ends Against the Middle?

The Wow! online for Visium centered around Visium HD, which zooms in to 5 micron resolution.  10X is stressing also that Visium captures data from the entire tissue section.  Any zooming and cropping by the user is done after the fact on the digital data; they need not specify Regions Of Interest upfront and so there is no opportunity to regret the choice of said ROI.

The Fix is In!

Formalin Fixed, Paraffin Embedded tissue is an amazing technology for room temperature preservation of tissue samples, but is a nightmare from a molecular analysis point-of-view since the formalin fixation chemically modifies proteins and nucleic acids.  10X announced fixed tissue extensions for both the Chromium droplet based methods as well as Visium spatial analysis, and the in situ product will support FFPE from the start.
For Chromium, the new chemistry (launching in the second half of the year) for PFA (paraformaldehyde) brings sensitivity to just below that with the 3' gene expression kits.  This also opens an option for stabilizing samples (aka quenching) for easier logistics in terms of sample collection, storage and batching.  The last thing you want is your expression signal to be indicative of post-collection events! 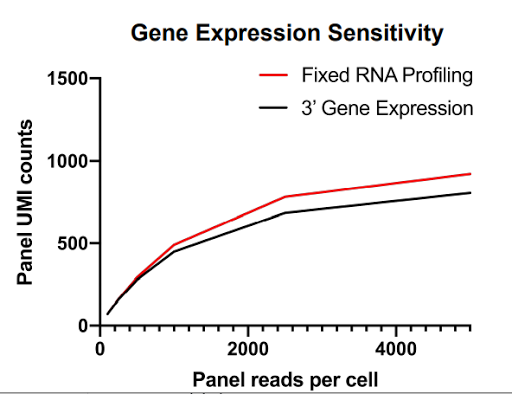 An FFPE chemistry for Visium  is launching later this year.  An academic group had squeezed some basic performance out of the current chemistry, but with greatly reduced numbers of genes detected.  As shown in the plots, the  new chemistry approaches the performance which the standard chemistry achieves on fresh tissue.  Since FFPE is the standard for archival storage of tissue samples, this opens up for Visium analysis large existing repositories to enable translational research. 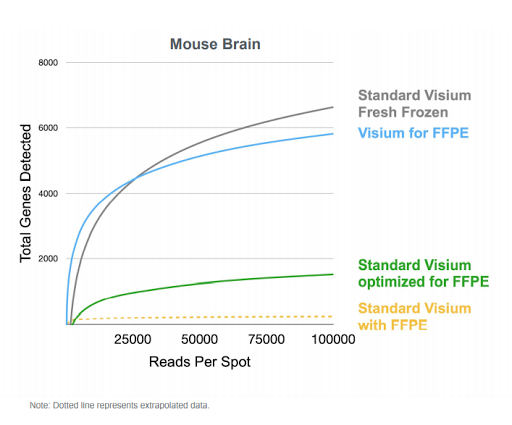 I had some exposure to this problem a decade ago at Infinity Pharmaceuticals and one thing I can definitely appreciate is the ability to profile multiple markers on exactly the same slide -- in the olden days of yore it was necessary to run each marker on its own slide cut from the same original tissue source and pretend that the tumor was of uniform shape and environment between the different slices. 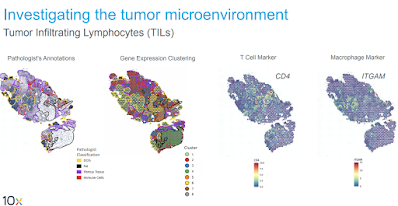 A number of enhancements to the Visium platform were previewed at JP Morgan and shown in somewhat more detail here.  CytAssist is an upcoming instrument to aid in the selection of the which tissue samples to transfer onto Visium slides, as well as transferring the sample onto the functionalized Visium slide.  A larger capture area slide is coming later -- again, from Infinity days I can appreciate this as many of our lung cancer samples were rather sparse on actual tissue -- lung is after all largely air!  Of course, larger capture area means running more reads; there has never been a free lunch. 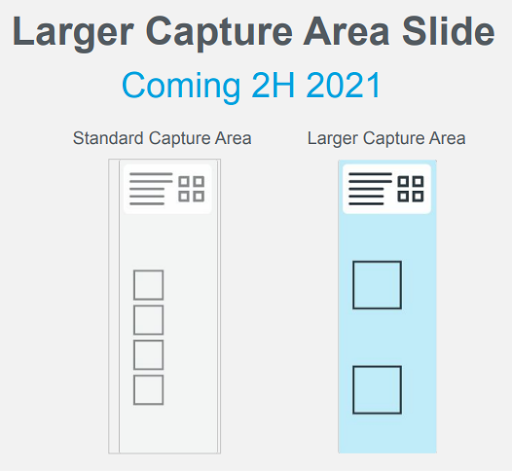 10X isn't fully showing their hand in the in situ space yet -- the instrument is shown in their slides as a big black rectangular prism.  But they are making major promises -- panels of hundres targets, subcellular resolution.  The in situ product will combine technology of 10X and acquisitions Cartana and ReadCoor.
Back at Infinity, the whole therapeutic hypothesis around hedgehog inhibitor IPI-926 in pancreatic cancer was in targeting the tumor-stroma interface -- I can just imagine how much more we could have seen with these in situ approaches! Alas, that wouldn't have fixed the failure of that compound in the clinic 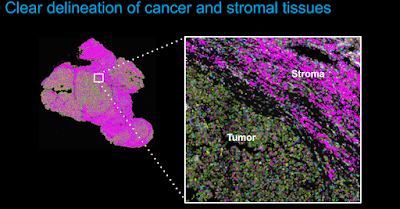 10X is currently enabling access to the Cartana technology through a service arrangement; an application window for this will open mid this year.

There's some really impressive stuff here.  I'm not in a space where the spatial analysis is applicable or practical -- damn those cell walls on microbes! -- but as noted above the resonance with previous problems is clear.  10X has an early jump on a space where a lot of other companies are headed -- don't be surprised to see more dispatches about spatial expression analysis in this space in the near future.
10X is confident that all of these systems will have major impacts on discovery and translational research, and hopes to further extend into actual clinical diagnostic practice.  It will be interesting to see how they -- and all the other players in this space -- proceed and how regulators will treat these wonderfully rich but also complex data types when reviewing diagnostic applications.
Posted by Keith Robison at 12:33 AM