Today Genapsys launches their sequencer into the U.S. market, with worldwide launch next year.  They also received a new round ($90M) of financing from a major firm, Foresite Capital.  In addition to the Press Release and Media Kit, Genapsys' PR team, provided me with answers to a set of questions I provided.  As a reminder, I previously covered their pre-print pushed out to BioRxiv six months ago.

The launch product is a pair of  $9.9K instruments, a very small footprint sequencing instrument and a somewhat larger template prep instrument.  In terms of utilities, the devices need only 110V power. Genapsys believes most customers will order these 1:1, but given the run times (see below) it's possible some customers will have one prep instrument driving 2-3 sequencers. 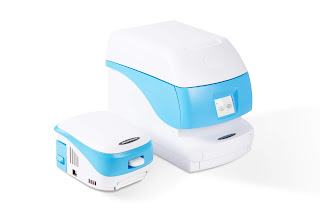 Flowcells are tiny and square.  There's two offered now and one in the future, with 1M, 16M and 144M sensors (left-to-right below.  Alas,the consumable kits offered refer to a "G3" flowcell. The Genapsys folks cleared this up in response that the G3 is the 16M (middle) flowcell. 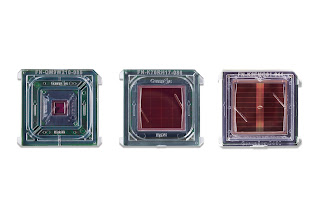 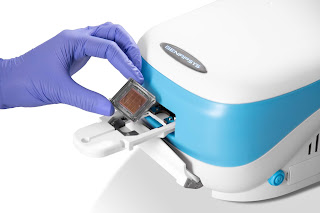 The current kits enable 264 flows for a typical read length distribution of 140-175 basepairs.  Pushing the readlength will be an area of further technical development, specifcally Each flow currently takes five minutes, a time that the company hopes to reduce.  That works out to 22 hours for a full run, with another 4 hours of wallclock for the template prep stage -- hence my though above that you could gang multiple sequencers to one prep instrument if you're willing to accept the timing of launching sequencing runs.  Data is output in industry standard FASTQ. A 16M/G3 flowcell kit goes for $300 and another $300 for the reagents for the template prep machine.  So less than $500 per gigabase for an all-in consumables cost.

Data yield with good libraries should be about 2 gigabases, based on 15M reads from a good library and 175 basepair average read length.  Good for a lot of focused panel assays or shotgun sequencing a couple of yeast/Streptomyces class genomes or a half dozen or so E.coli class genomes.  Should Genapsys successfully launch the 144M chip next year, that could be another 9-fold improvement in cost (though the chip may carry a higher price)

With the prices offered, Genapsys is now the lowest capital cost short read sequencer on the market, undercutting iSeq.  MGI is planning to enter the market with another low end sequencer sometime next year, a topic that I'm grossly derelict in covering.  It also would hardly be shocking if Illumina has new initiatives in this space.  Plus there's always the use cases in which Oxford Nanopore MinION class devices can compete, because even in some of the newer forms they're still about an eighth the price. . But anything that drops the capital cost is welcome in the startup space, as I worked through once before.

New sequencers, legal-style briefs flying back-and-forth -- definitely not a boring time in the sequencing instrument space as we head into what would normally be the holiday doldrums.  Stay tuned!

Have they announced the availability or pricing of their 1M sensor chip? Assume it uses the same $300 template prep kit?