After writing my two recent pieces on the business side of the long read industry I planned, after a recent extended family vacation, to try to get back to science.  Particularly after my chagrin when various correspondents pointed out a fact from each I should have found and didn't: in my ONT piece I failed to discover that ONT has two share classes and the Woodford fund's shares cannot be used to gain control of the company and in the PacBio piece that there is a $100M breakup fee due PacBio if for any reason the deal doesn't go thru.  I'm particularly red faced on that one, as a breakup fee would play importantly into PacBio's financial health should the deal go south; $100M would buy perhaps two quarters time.


But then a bunch of people threw my way the UK Competition and Mergers Authority (CMA) report on the merger and I foolishly opened the document.  It makes for interesting reading, but that is hampered by the fact it is highly redacted -- like my title. Reserving the right to comment on the contents substance at a future date (or never), I'd just like to give a tour around some of the redactions.
It is of course a year of redacted documents, with the Mueller Report dominating the headlines in past months.  The CMA apparently has very broad authority to access internal company documents at both PacBio and Illumina and they also conducted conversations with other players in the field that apparently had guarantees of not disclosing certain facts.  So the presence of redactions (or absence from redactions) is understandable and appropriate.

In Joseph Heller's novel Catch-22, at one point the protagonist Captain Yossarian is in the base hospital with a deliberately ambiguous set of symptoms.  This is one of the many schemes Yossarian devises to try to stay out of his potentially lethal duties as a bombardier in a U.S. Army Air Force unit in World War II Italy.  As an officer in hospital he has the duty to censor outgoing mail, a task which quickly bores him (highlighting mine):

All the officer patients in the ward were forced to censor letters written by all the enlisted-men patients, who were kept in residence in wards of their own. It was a monotonous job, and Yossarian was disappointed to learn that the lives of enlisted men were only slightly more interesting than the lives of officers. After the first day he had no curiosity at all. To break the monotony he invented games. Death to all modifiers, he declared one day, and out of every letter that passed through his hands went every adverb and every adjective. The next day he made war on articles. He reached a much higher plane of creativity the following day when he blacked out everything in the letters but a, an and the. That erected more dynamic intralinear tensions, he felt, and in just about every case left a message far more universal. Soon he was proscribing parts of salutations and signatures and leaving the text untouched. One time he blacked out all but salutation "Dear Mary" from a letter, and at the bottom he wrote, "I yearn for you tragically, A.T. Tappman, Chaplain, U.S. Army." A.T. Tappman was the group chaplain's name.

The CMA's self-censorship isn't quite so capricious -- I think. But the result is sometimes comical.  Now, since I don't have access to the unredacted document I can't actually determine if they are absurd, but one can certainly imagine it.

Sometimes material is censored where material in the public domain would seem to fit. It is widely known that for military classification of information the existence of public information does not remove proscription of trusted individuals discussing the same information if received as classified documents.  But such a rule would seem silly for a public agency.  It is more likely an abundance of caution.  I know that I have sometimes spent extensive time googling information to verify that what I may have learned under CDA is also available publicly; if I can't prove it then the item is struck.

For example, in discussing possible new entrants Genapsys is mentioned:

"short read sequencer which they hope to launch in 2019" would fit neatly in the redaction.  That's been discussed by me and by sources such as GenomeWeb

Similarly, in a section exploring ONT's competitive relationship to the companies it seems plausible that someone got a little aggressive in snipping: "a PacBio" would fit neatly in the first redaction to form "at times considered a PacBio competitor" 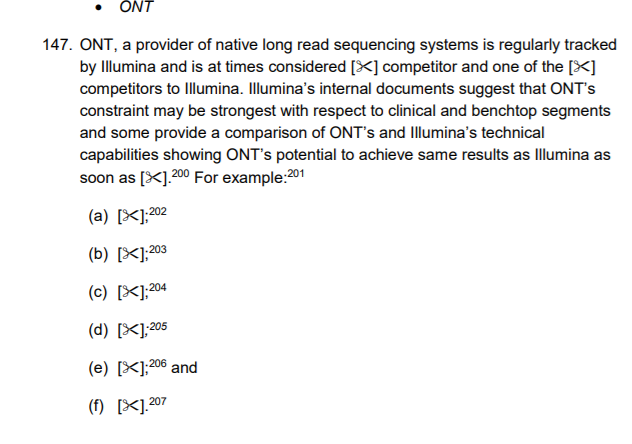 Note the 6 redacted examples.  This is neither unusual nor the most extreme; here's one with 9 -- and each has a redacted footnote! 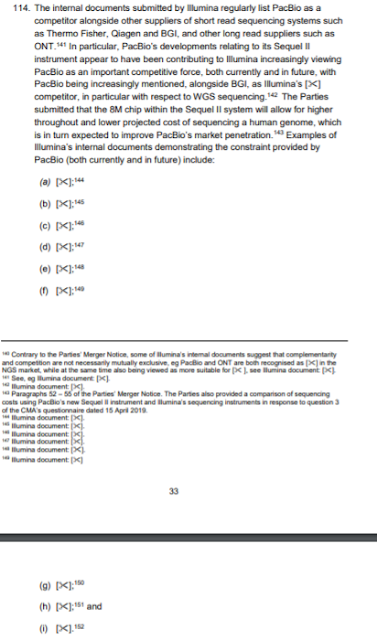 In one case I know what was redacted, as the unredacted information leaves a direct clue.  In Table 1 comparing sequencing costs, for some perverse reason one of the Illumina sequencers had its name redacted.  But the instrument is said to generate 8 million reads per flowcell, which identifies this as MiSeq with v2 chemistry.  It is curious, given the competitive analysis performed, that the iSeq was included but not the NextSeq 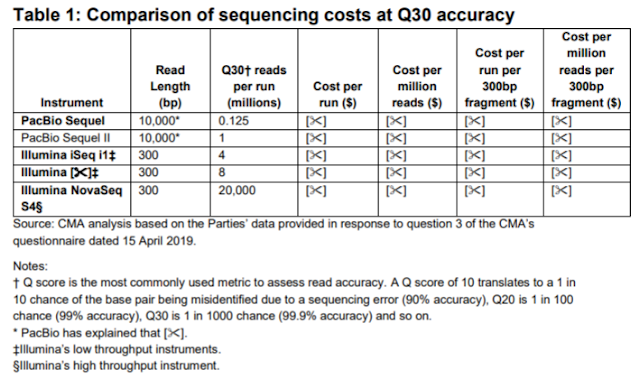 The redaction in the footnotes of a note on the PacBio is curious also; since it is on the Read Length given as 10,000 bases, it is almost certainly a note that this represents a mean or N50 for the purposes of the table.

And so it goes.  Most maddening is when entire conclusions are excised, such as in this case:

did this go "...suggest PacBio cannot survive without the merger"? Or how is this for tantalizing: a promise to discuss something further later in the document, but what something that is has been redacted:

I did find one section where it seems someone wasn't paying attention and left in information that the company who provided it might be upset.  In a section on possible new entrants, it is mentioned that Illumina is closely tracking multiple players but only one is thought to be relevant to the clinical space.  It is also noted that PacBio is tracking only one.  These two cases singular focus is potentially important information.  Presumably it is Roche/Genia.

With all of these redactions and more -- I have offered as examples just a taste of the 196 redactions in the document -- it is often hard to follow the logic.  But for better or worse I will try in some installments later this week to examine both the sort of information Illumina and PacBio turned over to the CMA and the nature of the CMA's extreme skepticism of the legality of the combination.
Posted by Keith Robison at 10:22 PM

Thank you for posting this.

It kind of reminds me of the FDA approval documents for Restasis (although the scissors icon does seem more fashionable than what I assume was white-out and pen):

In contrast, the material is still a lot to go through, but I was able to read the full contents for the Celexa FDA approval (for what is now the generic citalopram that I take, for less than $3 a month):

Thanks for the post. It seems like that illumina is quite confident with its dominance in both technology and marketing field, and Pacbio may be far more vulnerable in this transaction than we thought. And I'm so worried for the former Sequel buyers, and I remember once you said, Pacbio had to become a company with a long-term future.

The 100M breakup fee will help Pacbio keep afloat long term. Quarterly loss != quarterly cash burn. Pacbio has on average burned about 60M of cash a year. They currently have $80M in the bank and will get another $100M if the deal falls apart. This gives them $180M cash in the bank which will last them 3 years (2022). That's assuming Sequel II doesn't boost revenues and reduce the burn rate. I suspect the 8x reduction in sequencing costs with the Sequel II should help grow revenues substantially.

Nice post Keith. Paragraph 107 is the most interesting redaction for me. Illumina appear to have requested redaction on their biggest competitor, while PacBio are happy to state ONT.

as we see given by the current share price = merger price, the government has in fact potentially destroyed a business, not created a competitor. Meddling by government is seldom a good idea.