A Morning Visit to SeqLL

I've written in the past about SeqLL, the company which purchased all of the hard assets from Helicos after the latter's demise.  At the end of last year, CEO Elizabeth Reczek invited me to stop by for a visit and so I spent a morning having a frank discussion with Dr. Reczek and Director of Sales Lee Dalton and also was treated to a tour of their facilities.
A very clear distinction between Helicos and SeqLL can be seen in their facilities.  Helicos was located in Cambridge in a refurbished old mill complex known as One Kendall Square. If you'd like to see that building (I think even some of Helicos' actual space or nearly so), grab the movie The Spanish Prisoner and pay attention to the start-up's offices.  Exposed brick highlighted in those shots is a charm found in many OKS buildings, though the HVAC is a total nightmare.  I've done two tours of duty at OKS (once with Millennium, once with Codon) and it is a charming location. The complex features several trendy restaurants and an art-house cinema and is a short walk from Kendall Square subway station and the MIT campus.  All that charm comes, of course, with Cambridge rents, but a venture-backed firm such as Helicos is willing to spend for the vibe.

Angel-funded SeqLL is out in Woburn, near where the Route 128 beltway crosses the due north-south I-93.  Woburn was the birthplace of Tory thermodynamicist Benjamin Thompson (aka Count Rumford) and argues with neighboring Wilmington over being the town in which the Baldwin apple was discovered, but is better known for the prominent toxic waste battles chronicled in the popular book and movie A Civil Action.  Indeed, just around the corner from SeqLL is the large park-and-ride station named for one of the childhood leukemia victims involved in that case -- and built atop one of the Superfund sites in Woburn.  The company is in modern buildings that trade charm for economy.  There doesn't appear to be any sort of food in walking distance, and to be honest you need to drive a ways to anything particularly good - downtown Woburn has a variety of restaurants, but isn't very close to the industrial zone SeqLL lives in.  But there is a huge positive -- the rent Reczek quoted me had me thinking of starting a company there.

On the tour I saw what is apparently close to the entire fleet of original Helicos instruments (I think a few are still in the wild), many cannibalized for parts.  SeqLL had announced plans to launch a new instrument which would be substantially smaller -- benchtop instead of its own hulking cabinet.  They've succeeded in building the smaller instruments, abetted by many advances outside of sequencing.  For example, much of the original space was occupied by a backup power supply to enable graceful shutdown in the even of power failure.  Modern UPS units are more compact and can live outside the box.  Previously huge compute hardware to control various instrument functions now fit in much smaller spaces.  The benchtop instrument still has a huge, beautiful U-shaped granite block for stabilization.  The new boxes use the same consumables: SeqLL focused their limited engineering budget on shrinking the instrument, resulting in the box seen below. 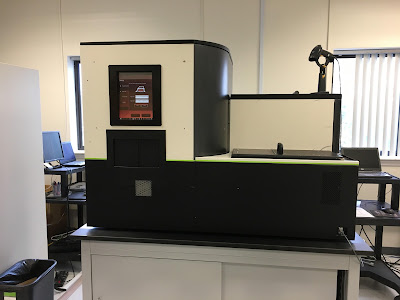 However, SeqLL has looked at the business proposition of launching an instrument and sees it as too expensive and risky.  They have a committed group of customers who love their service offering and aren't screaming for in-sourcing that work.  Keeping machines running in multiple remote sites is exponentially harder than running those close-to-home.  They also cited the issue of intellectual property: a Chinese company called Direct Genomics is also launching instruments based on Helicos technology and will be in direct competition with SeqLL.  Fielded instruments represent potential leakage of design secrets.

SeqLL is also trying to move their branding away from sequencing towards a focus on molecular counting, particularly from low abundance inputs.  They recognize that the Helicos technology has long been eclipsed from the standpoint of de novo sequencing.  Other single molecule sequencing technologies from PacBio and Oxford Nanopore emphasize long reads, where the Helicos technology was never going.  Where it excels is in counting applications, with the strong selling point of the fast, minimal library preparation, resulting in little if any distortion of counts.  So RNA counting and copy number analysis and ChIP-Seq and similar applications.  That changes their primary competitors to companies such as NanoString and the various vendors of digital PCR and qPCR.  The huge advantage of SeqLL in those spaces is not having to design and order specialized reagents or the losses of information that necessarily encumber targeted approaches. Of course, there's also overlap with Illumina and Ion Torrent, but SeqLL believes they can compete on the "no distortion" angle.  And it is still a sequencing technology, capable of reading variation while it counts.

How will SeqLL do going forward?  They'd like to broaden their funding and funding base as well as their stable of satisfied customers in academia and industry.  The original angel investor remains committed, but SeqLL would like to go beyond that source of funds.  By focusing their resources on the service business and further developing applications, the company can focus on organic growth rather than the spectacular multiples demanded by venture investors.  If you think that recipe only builds small companies, think again: IDT and NEB both used this game plan.

So keep an eye on SeqLL.  They're scrappy and they're focused on staying lean.  They've accepted they are a niche player, but that low input molecular counting niche is large and almost certainly growing.

Posted by Keith Robison at 8:14 AM

I love the more "business analysis" perspective of this post. Thanks!

Great Job Keith. I was looking forward to this.