Apple launched the Macintosh computer with a famous television ad playing on the launch year, 1984. What emerged was what we now know as the Mac Classic.  What may be less known is why the Mac Classic had that distinctive shape: it was intended to be backpack-portable, as Apple had a deal with a consortium of top U.S. universities to sell Macintoshes to their students.  Perhaps even more forgotten is that one of those schools, Drexel University in Philadelphia, made owning a Macintosh a requirement for students. 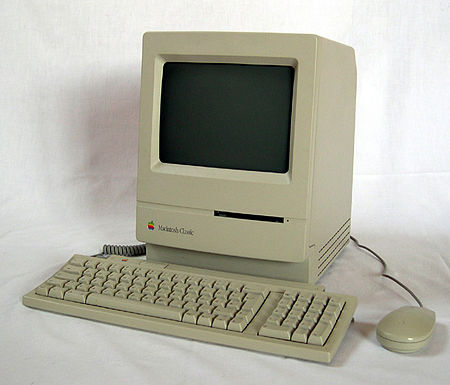 Drexel University is one of the 16 U.S. colleges and universities I've toured in the last 13 months, as TNG is planning to attend one of those (actually drawn from an even larger set) next year. But I also grew up not far from Drexel in Philadelphia's western suburbs, and Drexel's bold experiment was front page news.

Drexel was quite in front of most of academia with this initiative.  Concerns were raised about the cost impact on students, particularly those of limited means.  Every student with their own computer was certainly a break away from the norm of limited educational use of computers, with computer access via small numbers of computer centers.  That was still the norm during my 1987-1991 career at University of Delaware.  Certainly during my freshman year I was very unusual having a computer in my dorm room, and in my memory it wasn't much more common when I graduated.  Now it is almost unfathomable that college students won't have multiple electronic devices.  Indeed, every tour we went on seemed to emphasize the availability of on-campus IT help for student's devices.

But also in my mental mix is the just-past Oxford Nanopore Community Meeting, which I couldn't attend due to significant day job duties.  I need to write up what I've learned from tweets as well as some other recent ONT news. That's particularly frustrating now as there are missing details from the tweet stream I could have pursued if I had been in NYC.  But one item from that stuck in my head: ONT demonstrated the SmidgION device running off an Android phone.

SmidgION offers the potential to drastically drop in cost of small nanopore experiments, particularly if ONT has the "crumpet" design working.  Crumpet would separate the "wet" flowcell components from the expensive ASIC electronics, meaning that the manufacturing cost of each flowcell would be dramatically lower.

So, in my fevered mind, what if SmidgION became so inexpensive it could be integrated across the undergraduate curriculum?  In the strongest version, what if every biology student was required to purchase their own personal SmidgION ala the Drexel Macintosh requirement?

I'm open to the charge that this idea is an extreme case of genomania.  But, consider the transformative potential of centering a curriculum around sequencing.  Sequencing can decode genomes, which can lead into explorations of metabolism and taxonomy.  Student's might start with laboratory strains and then graduate to strains they personally isolated from natural environments.  ONT's direct RNA capability is picking up steam, with a huge consortium mammalian RNA dataset released at the meeting.  With their own sequencers, students could explore biodiversity via species barcodes or measure polymorphic markers in everyday organisms such as wildflowers and weeds.  Plus, there's a real growth industry in thinking out ways to convert all sorts of non-sequence biological phenomena and converting them to sequence tags.  Throughout all of this, students would be gaining practical experience in bioinformatics. Of course, not every biological problem is amenable to sequencing -- but nor is a microscope a universal tool for biology.

Of course, this could be done with any sequencing platform.  But just purchasing a MiniSeq for a department is a serious investment for a teaching department, and it seems highly unlikely any novice student would be allowed to touch such a thoroughbred instrument.  By that I mean just like a race horse those boxes are powerful, expensive and temperamental.  If a student busts the departmental machine, that's a hardship for everyone.  If they break their personal SmidgION, that's a few hundred dollar outlay to replace it (presumably: ONT hasn't announced pricing yet).

I fully aware this proposal is far beyond the norm.  Indeed, another trigger for it was this tweet bemoaning institutional resistance to introducing MinIONs to students


Anyone who uses @nanopore, there is pushback from some faculty who feel it is not good tech. I know better, but if you’ve got experience, especially with undergrads, please share!
— Tricia Van Laar (@tvanlaarmicro) December 2, 2017

On the more positive side, there's a new BiorXiv pre-print title "Oxford Nanopore sequencing in a research-based undergraduate course".  Thus has it been with every possible change in educational practice: some lead the vanguard and others resist change.

What equipment is considered necessary to own or know how to use changes for each profession over time.  I just missed the era of slide rules -- my eldest brother had lessons in them (though I suspect he knew long before then) in high school.  My generation needed simple calculators to get through out classes; TNG's is expected to know the TI graphical calculators.  Perhaps we are a decade away from sequencer competence being expected of large swaths of biology students.  But I believe we will see such programs popping up with increasing frequency.

At the moment ONT has a corner on the ultra-low cost sequencing instrument market.  So if such programs sprung up, a generation of students might think of ONT as the platform they reflexively associate with the term "DNA sequencing".  ONT may not have that market to themselves forever -- I know of a number of companies exploring inexpensive sequencing concepts.  But at the moment ONT has the opportunity, so it will be interesting to see how aggressively the company chooses to exploit it.

Posted by Keith Robison at 8:59 PM

Many thanks for this Keith. What an interesting analogy, very useful to think of what we are living through now with NGS with an anology to what we lived through a few decades ago.

While at a DC-area house-party (my spouse happens to be good friends with the spouse of a very well-connected and famous DC policy-person) I did what I normally do in such situations - find interesting people to interact with regardless of age.

Which of course led to the 'terrible' state of ONT informatics, in her words, especially in order to use it as a teaching tool.

The 'future is here, just not evenly distributed'. Thanks for the BioXiv link, will read it with interest. I figure by the time my elementary school-age boys hit the local high school I should be able to bring a phone-powered sequencer into class and show them a few things.

I see a new era of middle and high school science projects. The old school agar plate-bacterial presence experiment will take a giant leap into the 21st century. With metagenomics gaining so much importance today I am hoping this (or a similar inexpensive tool) will be used to train the next generation of aspiring physicians. I just wish someone come out with a plug-n-play module to analyze data easily. The more we can make these discovery tools accessible the better off we are for the future of science.

One thing I'm watching closely for is whether the release of the SmidgION and Flongle coincides with a drop in the price of ONT's sample prep kits. At the moment ONT charges hundreds of dollars for mixtures of buffers, salts, and enzymes that surely don't cost anywhere near that much to produce, even factoring in the cost of protein engineering R&D. This is understandable for the current situation, where ONT's market is academic labs and their flow cells cost 1-2X the price of a sample prep kit; but if the flongle drops the price per flow cell even 2-3-fold then the sample prep kits become the financially limiting step. I know there's strong interest in MinIONs/SmidgIONS from the citizen science/DIYbio communities and bet there's a market in the quantified self movement too, but a lot of people still can't afford the cost per run after the starter kit is used up. If ONT is serious (and I hope they are!) about expanding beyond academia and into educational settings or personal use, kits need to get cheaper.