A restaurant I frequented during my grad school days had a map on the wall showing Boston area transit routes from roughly the 1940s.  Remarkably, most of those streetcar routes are found largely unchanged in the MBTA's current bus routes.  Yes, routes have been altered to account for expansion of the Red Line and shifting of the Orange Line, but most of the routes are little changed and very, very few new ones have been added.  Some of that reflects the canalization of routes by the street patterns; there are only so many large streets suitable for buses and Somerville's hills and the various rivers impose further constraints.  Much of it lies in the always tight purses at the T and the political difficulty of ever closing an old route to enable moving resources to a new one.  Unfortunately, the commuting patterns in Boston are not conserved from the 1940s, with far more workers commuting from distant suburbs and dense developments springing up.
Cambridge's biotech district is a case-in-point.  Served by the Red Line and a smattering of buses (including two of those rare new routes, the CT1 and CT2), Cambridge is well-connected by the MBTA to some areas but rather painful to commute to from others.  This is particularly true for suburban commuters by rail: South Station and one northside line (Fitchburg, at Porter Square) have direct Red Line connections, the other North Station routes do not have good MBTA connections.
Filling this void has been the EZRide bus, which has expanded over time to provide MBTA-like service from North Station to the biotech zone every ten minutes during rush hour.  EZRide runs MBTA-like buses, with many seats facing the aisle, bars to hold onto for standees and a wheelchair lift.  EZRide is free for employees of participating sites and MIT students, but also available for a cash fare ($2 list, $1 discounted; MBTA passes are not accepted) .  EZRide takes a somewhat contorted route from North Station to Kendall and then on to University Park.  Some of the most egregious twists have been removed in recent times, but the less-than-streamlined route expands the base of customers and served sites.  For example, EZRide makes a stop in the North Point development by the Museum of Science, which is slowly being built over unused railyards.  Extra passage on Binney Street and Broadway is the result of a slightly older street pattern, locked in now by popular stops.  That could be clipped out now that it is possible to go from Third Street over to Main Street, but two large stops would be elided.

Alexandria Real Estate (ARE) is a major player in providing real estate specialized for biopharma.  Both starbases have been in Alexandria buildings, and in the first one I got to know one of the Alexandria employees who ran the facility and exposed me to how different this is than other real estate.  Specialized ventilation, shared autoclaves, dealing with waste storage and pickup; biotech space is not anything like an in-law apartment over the garage!  Alexandria has been expanding in the Boston area, both by building out  completely new space (the vast parking lot by old starbase now sports a huge glassy biotech building) and buying existing space, notably One Kendall Square where I've done tours of duty both with Millennium and Codon.  OKS is also home to several fun restaurants, including Friendly Toast, Mamaleh's, Cambridge Brewing Company and Flattop Johnny's.

For one reason or another, Alexandria has decided to pull out of the EZRide consortium and launch their own shuttle service.  Perhaps it was around cost, perhaps around an opportunity to further brand their holdings.  Starting in February, sleek corporate-style vans have been running between North Station and Technology Square, stopping at ARE sites and MBTA stations (Lechmere and Kendall).  Ridership is restricted to ARE tenants; you must have a current sticker to ride.  The vans, sadly, lack any wheelchair lifts or other ways to accommodate anyone who can't climb their stairs.  Drivers are very polite and the vans are spotless.  WiFi is allegedly on the vans, though that was spotty (I'm too lazy to login most days). An online tracker exists, though I've become jaded after seeing a van icon hover for 10 minutes where an actual van should have been in my line-of-sight.

ARE has, thankfully, shown a willingness to adapt.  Their original route had a complex loop to directly serve One Kendall Square; that tacked on four extra traffic light passes and slowed the route.  Now a more direct route is used, though it necessitates OKS riders to make 1-2 major street crossings.  ARE originally tried to use three vans to serve the route with an uneven spacing of runs; this worked very badly for me in the evenings and I tended to walk to the T instead.  Recognizing this didn't work, they wisely expanded to four vans.

Private commuter services have been controversial in some cities, particularly San Francisco.  In Boston, there has been an attempt to consolidate them in the burgeoning Seaport District, which has even worse connectivity to the MBTA network than Kendall.  Personally, I like the way the EZRide is open to all as then it better fixes a serious hole in the MBTA network -- though actually having an equivalent MBTA route would be even better.  But it's hard to resist the temptation of the convenience and comfort of Alexandria's shuttle.  Now that spring is here I should resist and bike more, but I'm not one to easily resist temptation -- which goes double for the French-style bakery which ARE drops me off in front of! 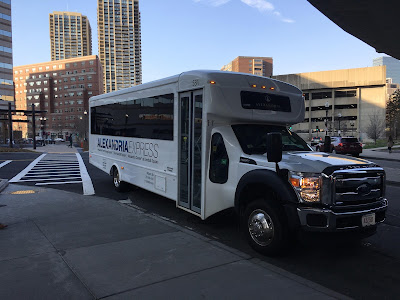