10X Genomics launched their approach to obtaining long-range genomic information last year with a big financing and some exciting preliminary data at AGBT15.  Now they are back at AGBT16 with an upgraded instrument, improved biochemistry, new software and new applications, along with a trio of major co-marketing agreements and a splashy hire and a raft of both published and unpublished data from academic collaborators.

10X's approach is to add information to short read platforms.  Last year it was just Illumina, but now it appears that will expand to QIAGEN's GeneReader platform. 10X's magic sauce are gel-like beads containing barcoding oligos, which are co-encapsulated in droplets along with samples of interest.  In droplet generation of libraries results in in sets of linked reads with a single barcode and derived from a single input molecule, which can then be processed informatically to yield long-range information.

The first part of the new lineup is a redesigned and re-named hardware component, the Chromium Processor.  It's also a bit more expensive, going from $75K to $125K, but existing users are being offered an upgrade for the difference in price (and there are over 50 units in the field). The Chromium processor increases the number of partitions which can be generated to over 1 million, which minimizes the number of droplets which receive two input DNAs.

A second major upgrade is the biochemistry.  A major goal was to improve the uniformity of coverage, and now the uniformity is similar to conventional libraries. Previously, 10X recommended making one conventional library and one 10X library per sample; now they claim that only the 10X library is required for high-quality calling of at both the scale of single nucleotide variants as well as structural variants and haplotypes.  In addition, no mechanical shearing is required in the workflow, greatly simplifying it, particularly from an automation standpoint.  The barcodes are now inline to the insert, rather than being in the dual-barcoding positions, enabling 10X to be used on the X series of instruments from Illumina -- so yes, you can now run 10X on the X10, which is touted as offering long range information on a population scale. Sample input is only 1ng, contrasting with many other contenders in the long range field which often require micrograms of material.

A new aligner, Lariat, was developed in conjunction with Serafim Batzoglou, which can leverage the GemCode information to align previously unalignable reads, as the easily alignable reads within a barcode can be used to restrict the location of the remaining reads, often enabling them to be uniquely mapped. 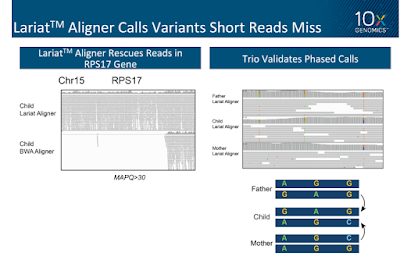 10X has also developed a de novo assembler, which David Jaffe will speak on in the evening session, enabling assembly of de novo genomes.  This works by first building a short read graph, then using the barcode information to tease apart hairballs in the graph, and then finally resolving graph bubbles into phased information. 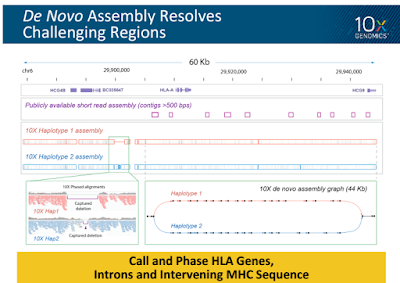 On the applications side, 10X is working with Agilent for an optimized set of the SureSelect reagents. to be used downstream of GemCode library creation. Two major additions to the bait pool have been made.  First, paralogs which couldn't previously be uniquely aligned are included, since the Lariat assembler can now map reads to these.  Second, selected intron content has been added to enable haplotyping across large introns. Daniel Macarthur of the Broad has already touted on Twitter the ability of this system to resolve compound heterozygotes in the complex Titin (TTN) locus, a gigantic gene with many repeats, 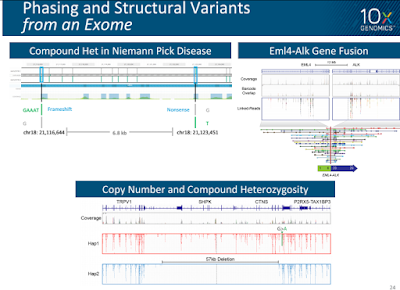 The other big new capability is single-cell RNA-Seq ("Chromium Single Cell").  In this mode, disaggregated cells are encapsulated, lysed, cDNA generated and then converted to a GemCode library.  Essentially every partition carries a GemCode bead, so Poisson loading applies only to the cells.  In contrast, the 10X team pointed out to me, the recently published Drop-Seq method uses double Poisson loading, so only a small fraction of droplets receive both barcodes and a cell in that method.  10X touts their method as achieving a higher fraction (close to 50%) of labeled cells. On the order of thousands to tens of thousands of cells can be profiled, and in contrast to schemes relying on mechanical trapping of cells there are no restrictions on cell size. 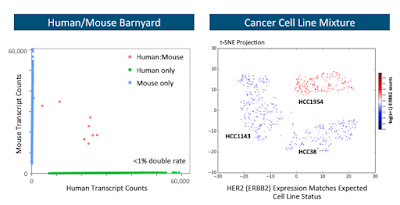 What about other applications?  10X has lured Deanna Church away from her prior position, and she is already querying Twitter about applications in fields such as metagenomics. Academic collaborators have already used GemCode to scaffold and haplotype non-human genomes  What would you do with a million plus barcoded nucleic acid fragments?  Time to get dreaming!

A thank you to 10X's Michael Schnall-Levin, Brian McKelligon and Rob Tarbox for taking time to chat with me on the phone, sending me Michael's slides in advance and for permission to use images (all images courtesy of 10X Genomics)
Posted by Keith Robison at 3:04 PM