I'm committing myself this week to an uncommon intensity of posting.  It's AGBT week, and while I'm there I plan to be busy both here and on Twitter.  Genomics has always been the focus of this space, but once in a while I beg the readers' indulgence while I write on something else.  Just after AGBT comes the Oscars, and in the likely case I'm completely exhausted (though sitting much more comfortably than I was for last year's Oscars), I want to scribble a long-overdue tribute.  For when the montage appears of previous winners who died since the last telecast, I'll be looking for the only Oscar awardee I ever met.  The nature of his work meant that many are utterly unaware of it, but he contributed significantly to the visual spectacle of many films, including one which influenced the look of a vast number of films of the same genre that followed it. 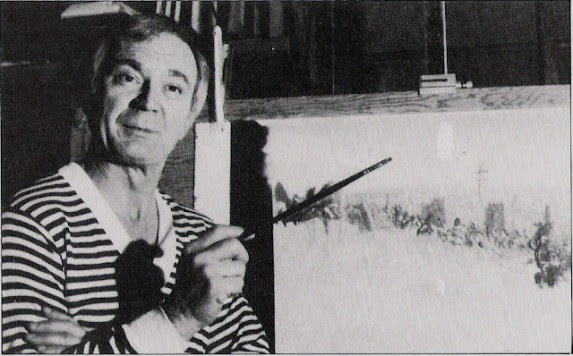 Matthew Yuricich's life story is not unlike a lot of American males of his generation.  Born to Croatian immigrants (and entering school not knowing any English), he heard the call to service and enlisted in the U.S. Navy, serving on an aircraft carrier in the Pacific Theatre during World War II..  Coming home, he went off to Miami University (OH not FL!)  to play football and major in art.  Marrying his college sweetheart, he went west to Los Angeles to seek his fortune. There he ended up learning, via apprenticeship, the art of matte painting, as well as hobnobbing with stars such as Betty Grable and Marilyn Monroe.

What is matte painting?  Let me illustrate with a few examples of movies he worked on.  Imagine you are filming a huge historical epic, Ben Hur, but doing so on sound stages and back lots in California. You need to make sets for some of this, but to get the huge feel desired by the director, the sets are going to need to extend high above the cast in order to enable wide shots.  Instead of actually building such tall sets, at huge expense, a solution is to paint in the remaining portion of the desired scene.  Not by actually painting on the film, but by painting the scene and then combining the two images post-production.

This is where a lot of mental artistic wizardry comes in.  For various reasons, the matte painting would not be shot with the same photographic processes as the live action material.  So in painting the scene, it was critical to paint it so it would photograph correctly, not look correct when viewed directly.

Of course, once you've perfected the technique to merge images, more opportunities are opened.  An anachronistic clock in 1776?  Paint it out!  Need a ghostly apparition of a baseball diamond in an Iowa cornfield for Field of Dreams?  Paint it in! Not content to alter reality a little?  How about painting ivy all over the monuments of Washington D.C. for Logan's Run, which would earn Yuricich an Oscar.  Or, consider this extreme: after the climax of Ghostbusters the camera pulls back from the heroes standing on a small piece of a ruined and monstrously-transformed building.  Only a tiny bit around the actors was physical set; the rest of the entire shot is a Yuricich.  He also was part of the team that created the highly influential visual atmosphere of Blade Runner, perhaps my favorite science fiction movie.

I met Yuricich only once, when my family visited him during our mammoth coast-to-coast car trip when I was eight.  As much as I enjoyed seeing his paintings from various movies, playing with his barber's chair (inherited from his father, I think) was almost as much fun for me at that age.  The visit even triggered a change in our plans; after getting a personal tour of the studio and seeing paintings and models for the then in-production Close Encounters of the Third Kind (nominated for the visual effects Oscar, but lost to Star Wars), we detoured to visit (and hike around) Devil's Tower, which featured prominently in the movie.

As you might have guessed, Matt Yuricich wasn't just a random family acquaintance.  That college sweetheart was my father's sister.  Alas, we lost her near the end of 2011, though throughout her life she was a remarkable woman and an entrepreneur.  I never got a chance to see Uncle Matt in my adult life.  He had hoped to come to one family wedding, but a bout of illness prevented it.   But, I got in the habit of staying for all the credits at the end of films to watch for his name and others: he recruited his brother Richard into the industry (who was also nominated for an Oscar) and two of his sons worked there as well.  A grandson even has an IMDB listing!

Uncle Matt died  last May at the beginning of the summer blockbuster season, after having been retired for many years.  But his work clearly lives on.  For a far more expert commentary on his oeuvre with many photos, there is a lengthy posting from 2010 on the Matte Shot blog and a tribute there after his death. You've probably seen more than a few of the movies mentioned there, and most likely you had no idea how much of them were brushstrokes on canvas.

Posted by Keith Robison at 9:30 PM