Reflecting on a Year of Ion Torrent

Ion Torrent released three more datasets this morning, all generated on their 318 chip.  One's from E.coli but two are human genomic samples.  With approximately 1.2Gbp of raw data coming from these 318 chips (fron around 6 million quality filtered reads per chip), they are starting to move up the food chain in human genomics from pure amplicon sequencing to more complex small targeted resequencing efforts.

The Ion Torrent PGM platform was officially launched last December, and in that year they have indeed made enormous progress.  As promised, the 314 chip came out at mid-year and the new datasets suggest that the 318 will be launched imminently.  The typical read length from the system doubled this fall from ~120bp to ~250 bp. Quality has gone up.
That's not to say everything is coming up roses.  The three posted datasets have spectacular loading efficiencies, as shown in the first three rows of the plot below.  Even then, the chip loadings still show cold zones (blues and greens) and strange patterns.  More importantly, the bottom two rows are from two 316 datasets I got back last week from a service provider who is experienced with the Ion platform. I've seen better and I've seen worse; the key point is that loading is still a bit of an art and has an enormous impact on yield. 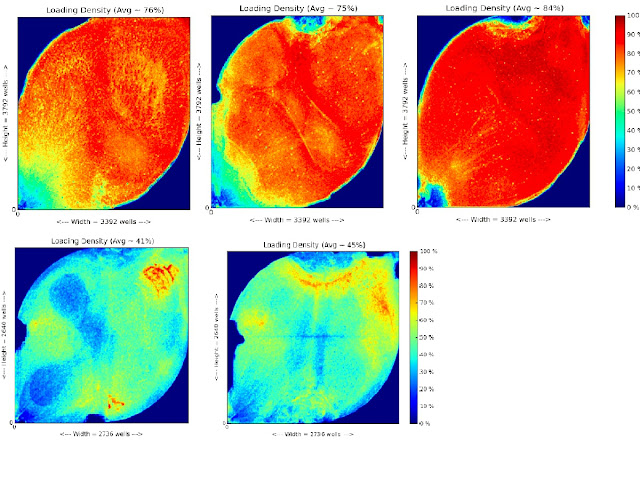 Sequence quality continues to have its ups and downs. Homopolymer calling has improved, but miscounting of runs still is common.  Worse, sometimes a sample seems to get the yips; one of my last Ion runs at the old shop lost a huge number of runs to homopolymer miscalling gone wild.
A bigger question is the acceptance of the platform by the academic bioinformatics community.  There certainly are some good commercial solutions out there that support Ion and the Ion group snagged some crackerjack developers for their own efforts, but there has not been an outpouring of new applications from the universities.  Of course, a lot of programs are platform agnostic and those targeted at 454 that can leverage the flow files (SFF) should work, but with the distinctive error modes of the Ion are an issue in many spaces.  Illumina is very well supported with de novo assemblers, realigners and other specialized tools which work intimately with platform-specific error models.  On the kit side, a few vendors have rolled out Ion compatible kits but it is only a trickle.
Ion also faces a major decision.  As detailed in my Nature Biotechnology News & Views (bizarre I haven't plugged it until now!), the 314->316->318 evolution has been largely around enlarging the chip surface area available for data capture and packing the sensors in tighter.  It's unlikely the amount of usable surface within the current chips can be increased without inefficiencies in fluid flow and the wells are now packed about as tightly as the current beads will allow.
So a hypothetical "320" chip would need to go to smaller beads to enable denser packings.  Smaller beads have fewer DNA molecules, changing the signal-to-noise characteristics.  Not a show stopper, but not a layup either.  Plus, it introduces a diversity of kits and reagents, which is opportunity for confusion and certainly more to produce and support.
The other possibility would be to roll out a new chip with larger dimensions, but this would of course not fit the current generation of machines.  Ion would face a potential backlash from early adopters; a nearly sure but expensive solution would be to allow them all to trade up for a bigger model.
It's a tricky time for such a transition.  MiSeq is now in the field and performing well.  While the Grand Challenges have apparently sustained interest, Illumina is finding that folks will just play with their machines purely on their own; witness an ultra-long-read trial by SEQAnswers founder Eric Olivares.  At this time, MiSeq has a substantial backorder (delivery times around 8 weeks), but that should settle once the initial orders are out and production ramps up.
I've looked very carefully recently at what the two platforms might look like in terms of running cost and labor, and even with the OneTouch Ion would require more care-and-feeding than MiSeq since MiSeq has such a simple template prep scheme (I tend to explain it as "so simple even the bioinformaticist could do it", though I might take offense if Illumina starts using that as a slogan).  On the other hand, the shorter cycle times could enable crunching out more data and there is that hope of future performance upgrades.  MiSeq has long (and as noted above, perhaps much longer) paired ends, opening the possibility of overlapping them in the middle for structural variant and de novo assembly applications.  Ion has been slow getting their mate pair kit to market and probably will never have paired ends.  Of course, paired ends are nearly irrelevant if read lengths are sufficiently long, but 250 really isn't long enough to make that call.
The benchtop market also may have new entrants in the near future.  The PinPoint Mini had been announced to launch around now, but there's been no build up or announcements on the manufacturer's website.  This sequencer was claimed to have an all-in equipment price cheaper than Ion's all-in (meaning, PGM+OneTouch+Server) and very low consumables, plus a very simple rolony template prep.  GnuBIO plans to get a limited release out early next year, and while their initial system will support only amplicon resequencing that is (a) a big chunk of the justification for any of these sequencers and (b) not at all the limit of what the technology can support.  Presumably we'll hear a lot more about these systems via Marco Island early next year.
So Ion's had a big year with commercial and scientific success, but competition is fierce.  Like the Red Queen (below), running as fast as you can won't necessarily carry you forward.

Posted by Keith Robison at 8:46 AM

awesome summary of Ion Torrent in 2011. Congrats on the NatBioTech article downloaded it and reading now. Should have plugged earlier!!

Any chance you could tell us who the service provider with the Ion Torrent is? Are they in the Boston area?

Let's be honest, you may be required to hold back but I won't. Every one knows Life Tech is coming with a new Ion Torrent, they aren't saying it so they can milk some more units before the introduction. No, the machine was not the chip, and no there was no Moore's law. I am starting to seriously have issues with these stock market driven companies. It's not helping anyone and by far, it's not helping the infamous data deluge, biologists, biochemists and all life scientist should seriously stop looking at the 'machine' and it's gurus and look into what everyone has so horribly missed: handling data... Ion Torrent will not answer this issue and scientists should think about a central open solution, right now someone is laughing all the way to the bank, and it's not science...

Did you seriously send me over to Axco Biotech's web site and expect me to take them seriously... sorry, one does not create a company with a one trick pony... It's impressive to see such brilliant people have so little business acumen. I would love to wish them success, but they will likely feel the greed of all their collaborators and the competitive wrath of the big public companies they love to give orders to in exchange for free ipads... Science: The new Wall-mart world.

Shaun: I can discuss experiences with specific service providers by email;

There does appear to be a pretty clear and simple path to paired end sequencing. There is an document on their community website describing this process. It's pretty light on details, but much easier than mate pairs.

I agree Moore's law might be running out of steam with the current hardware, but new CPU's require new sockets as well.

How do I create an email subscription to your blog? Sorry that this is not related to this post in particular.

For the last commenter, I didn't know until you asked! I've activate the "Follow-by-email" gadget on the page, so apparently if you enter your email address there Google will send you the blog each time it is posted.

Some email programs, such as Outlook, allow you to get RSS feeds in a mailbox.

Keith - I wonder if you can do some sort of commenter accuracy informatics, eg, if you look at the last year or two of ion comments, is it possible to rate them for accuracy ?
like the post in Feb 2011, em PCr will always be a nightmare > 6hours - seems like that person has egg now, doesn't it ??