It has hardly gone unreported in the media that today marks the 50th anniversary of the manned spaceflight and the 30th of the first space shuttle launch.  It was an accident of scheduling delays that put that flight on the 20th anniversary of Gagarin's, but what an appropriate synchrony that is!  My own contribution herein is to pen two quick capsules of two books that deserve longer reviews: Two Sides of the Moon and Riding Rockets.  If you have a strong interest in the history of spaceflight, you should consider reading each of these if you haven't already.  The only caveat I'll throw in is that if you have a young friend who fits that category, but you do not, you should at least skim Reading Rockets before passing it on; some of the content (and most of the humor) is of a mature nature.  While neither book is primarily about either of the events commemorated today, both bear on it.
Two Sides of the Moon is a dual as-told-to biography of Soviet cosmonaut Alexi Leonov and American astronaut David Scott, told in the form of alternating chapters. Their paths were often parallel, though divergent in many respects.  Indeed, they may well have faced each other as opposing fighter pilots in tense German airspace during the 1950s.  Each would face a harrowing first spaceflight: Leonov's first ever spacewalk nearly ended in disaster when he initially could not re-enter the spacecraft (a similar problem would challenge American Edward White on his foray) and David Scott (with Neil Armstrong) would experience a Gemini spacecraft spinning nearly out of control.  Both would train for their country's respective moon program; Dave Scott ended up the most spectacular amateur geologist in the Apollo program, whereas Leonov's mission would never leave the ground.  Eventually, their paths would cross in Apollo-Soyuz, with Scott in an administrative role and Leonov flying. 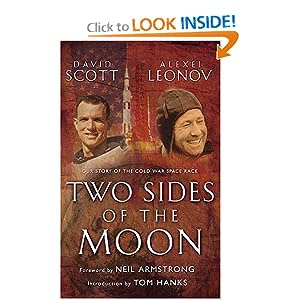 Two Sides of the Moon is the first book I've read that tackles the Soviet space program from a Soviet perspective (I've read a James Oberg book on the subject, but again he's an American).  The books I devoured growing up lacked many details on the Soviet program due to their secrecy, especially the multiple disasters and major disappointments (in fairness, they also lacked details on the various NASA misfires that weren't in full public view).  Leonov in particular is an interesting witness, as he trained originally to be an artist.  On his first flight, he took crayons and attempted to capture the colors he saw with them.  Only much later would the U.S. inadvertantly fly a gifted artist, Alan Bean.
Of course, like all autobiographical works there is an issue of perspective and omission.  I can't cite any specific examples for Leonov, but I did occasionally find myself thinking that something had been deliberately left out.  Scott's account is similar; he touches on the ethical incident (involving the sale of stamps flown on his moonship) which sidetracked him at NASA, but in a way that lacks much contrition.
The tie to today is that Leonov held Gagarin as a close friend.  We see Gagarin's Vostok flight through his eyes and also Gagarin's later frustration with being grounded.  Unlike Alan Shepherd, but like John Glenn, Gagarin would not fly in space again because he was viewed as too valuable a publicity asset who could not be risked.  It is easy now to dismiss the many of the health concerns which were present at the time; nobody now worries that every space traveler will be driven insane by the vastness of space (see Mary Roach's Packing for Mars for an excellent coverage of this, though it has even more mature content than Mullane's book).  We will never hear Gagarin's side, as he died in a mysterious plane accident.  That accident for years was blamed on Gagarin being drunk at the controls, a conclusion which Leonov fiercely believes to be slander on his friend's memory.  Leonov favors a hypothesis, for which he marshals evidence (but again, is he too close to the subject to be objective), that Gagarin's plane was thrown out of control by a too close flight of a supersonic jet. 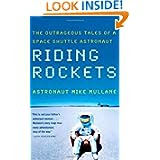 Riding Rockets, by space shuttle astronaut Mike Mullane, is a rollicking yet touching memoir of a member of the first class of purely shuttle astronauts.  As noted above, Mullane is quite blunt about both the thrill and the less pleasant aspects of space travel.  For example, you really don't want to drink for about a week before a space shuttle launch, as extended time in the launch couches leaves you both urgently needed to fulfill a biological imperative and physically almost unable to do so!  But he also describes the thrill of spaceflight.  I'd like to think I would share one aspect with Mullane: on his first spaceflight while the rest of the crew slept mid-deck where sleep was easiest (and it is not easy on the shuttle, due to noise), Mullane camped out on the flight deck so he could watch the constant change of the scenery.
Riding Rockets can be seen as a series of overlapping biographies, with Mullane in the center but a number of important figures sketched around him.  There is the touching story of his father, whose tall tales of the Army Air Force first inspired Mullane to fly, and whose refusal to quit leading an active life after losing use of his legs to polio is inspiring.  Mullane's wife stood by him resolutely, only showing the cracks in her emotional facade after he wanted to fly post-Challenger.
One of the longer sketches in Riding Rockets is of Judy Resnik, and it is even sadder than Gagarin's story.  Resnik and Mullane's class would be the first astronaut class with female candidates, and she and the others would face constant scrutiny of the press, traditionalists, feminists and their peers.  But, Resnik would not get the payday of being the first American women to fly.  Indeed, Mullane admits to more than a little guilt in that department as part of the knuckle-dragging brigade.  Furthermore, as an attractive divorcee she was shunned by many astronaut wives; one apparently screamed a threat during a party.  Resnik was serious, shy and reserved, leading to few close friendships. She would also endure, with great dignity, various training exercises requiring awkward situations.
Resnik and Mullane would fly together on their first flight, and their personal relationship was so close that many assumed they were romantically linked (a possiblity Mullane admits to being tempted to, but claims he never acted on).  Indeed, Mullane's wife Donna was one of few astronaut wives to welcome Resnik (ironic, considering she probably had the most to worry about!).  Resnik would endure even more criticism from feminists for the iconic in-flight crew picture, with her floating at the top of the photo; the pose was absurdly characterized as excessively resembling a cheerleading set-up.

As with Gagarin, Resnik would never live to write memoirs, perishing in the Chellenger disaster.  This one of many areas where Mullane's book grows dark and his ire red-hot; he has nothing but contempt for the idea of flying amateur astronauts on the shuttle.  He tells some pretty harrowing second-hand stories of various guest astronauts; one unnerved the mission commander by being much too interested in the workings of the emergency hatch (which was subsequently locked) and another had a complete emotional breakdown early in a mission.  Not only does Mullane see the launch schedule of Challenger fatally affected by Christa McAuliffe's presence, but that Gregory Jarvis was only aboard after being bumped from a prior mission by Congressman Bill Nelson.
Mullane really levels his guns on two other targets, which will bring us back to today.  George Abbey ran the shuttle program and was initially seen as an virtual father figure to the astronauts, but Mullane came to despise him as a empire-hungry bureaucrat with a capricious and opaque management style.  Far sadder is is other target, the head of the astronaut office during that time: John Young.  Young is portrayed as an equally opaque and ineffective manager, unwilling to stand up to Abbey and playing his own infighting games.
What is particularly sad about this is that Young is truly a hero of the space program.  He has flown more vehicles in space (four) than any other human being (Neil Armstrong never flew an X-15 in space; otherwise he would be tied).  Young walked the moon and is one of only three humans to have twice flown in proximity to the moon.  And Mullane is gracious is acknowledging all of those many acheivments; Young was a great astronaut and a lousy administrator.
But what Mullane brings home best is the truly breathtaking bravery of John Young and Robert Crippen thirty years ago.  When they lifted off with Columbia from the pad that day, they were riding the most complex space vehicle assembly ever designed.  You can make that claim on virtually every dimension, from engines to software to control surfaces, it was far more intricate than anything before it.  Yet, nothing other than the orbiter had ever flown, and that only in a sub-sonic glide test!  The audacity of the shuttle program's engineers did not always pay dividends, but 30 years ago today it did work out. What a truly amazing pair of feats we celebrate today! 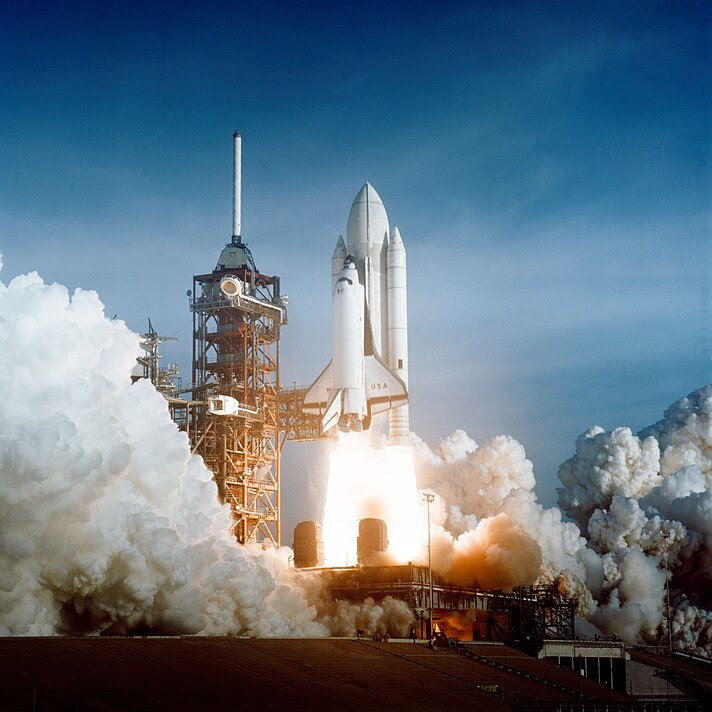 Posted by Keith Robison at 9:05 AM

Email ThisBlogThis!Share to TwitterShare to FacebookShare to Pinterest
Labels: space