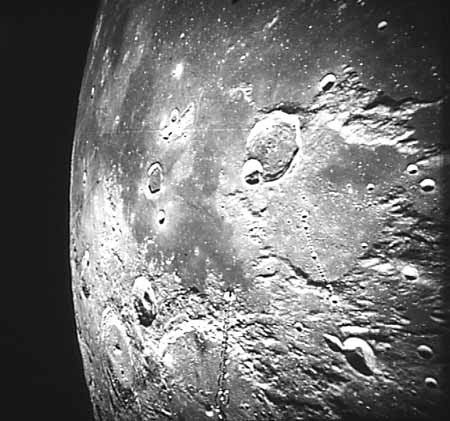 A stark frame from Apollo 16 shows a lunar surface remodeled by violent collisions. Even in a single static snapshot hints at the order of events. The large crater near the center of the image was later remodeled by a not small crater breaking the original rim. Careful study of other photographs, especially of the even more chaotic far side of the moon, can piece together the temporal order of events, from such overlaps in craters and their ejecta.

The moon has more than a few parallels to the genomic chaos present in cancer. Most cancers are characterized by a degree of aneuploidy, though a few only have small numbers of genomic alterations, much like the smoother regions pictured. Some cancer cells have chromosome complements like the far side of the moon, battered to the brink of non-recognition. And like the two large craters, we often picture the chromosome alterations as being sequential, with long gaps in between. Such step-wise changes are seen as mirrored in stepwise changes in biology; each new change has the potential to bring new advantages to a proto-tumor cell. A corollary of this is that these changes are ongoing; today's tumor has more changes than several months ago, and a sample several months in the future will look yet different. Indeed, one criticism sometimes launched at cancer genomics efforts is that they are taking a single snapshot of a fast-moving phenomenon.

If you look closer at the lunar photo, another interesting feature will emerge. What might first appear to be a slash pointing at the large crater is actually a chain of craters. These are believed to have arisen from a single object fragmenting before impact, much as the comet Shoemaker-Levy did a number of years ago prior to crashing into Jupiter. Such crater chains are seen many times on our own moon, as well as on Mars and moons of Jupiter. A new paper in Cell brings our attention to the same phenomenon in a subset of cancers, in which genomes are multiply mangled in a single event. And, like Apollo 16, the key evidence for understanding very dynamic events are static genomic snapshots.

For the impatient such as this author, Figure 1 C&D is perhaps the quickest way to dispel doubt that such occurs. These use Circos diagrams to depict the chromomal rearrangements present in a chronic lymphocytic leukemia (CLL) sample at initial presentation and relapse: the rearrangement diagrams look like carbon copies, despite 42 distinct alterations in the diagnosis samples. These were identified by high-throughput paired-end sequencing. Many of these breakpoints are locally clustered on the original chromosome; the long arm of chromosome 4 suffered nine breaks, each re-connected to a different chromosome. Clustered breaks are sometimes remarkably tightly packed: seven rearrangments are from a single 30 kilobase region and another 6 from a 25 kilobase region. However, fragments from such near origins are flung around, often ending up distant from each other in the tumor chromosome.

Digging deeper, a curious pattern emerges from looking at the pattern of loss of heterozygosity versus copy number. Clearly the single copy regions cannot be heterozygous, but what is striking is that all of regions of copy number two are heterozygous. This clearly indicates that none of the copy number two regions are the result of a reduction to single copy followed by an expansion back to two copies; heterozygosity lost cannot reappear. Change points for copy number fall essentially evenly into the four possible intrachromosomal buckets: deletions, head-to-head inverted, tail-to-tail inverted, and tandem duplications.

Now, this could be a single odd case. The researchers combed through the masses of publically available cancer cell line copy number and LOH data (which they largely generated) to find more. Out of 746 cancer cell lines, 18 (2.4%) showed the pattern of frequent changes in copy number in local regions of chromosomes. So the phenomenon appear to not be unique to their original sample, though present in a small minority of cell lines. They selected four cell lines for paired end sequencing to further explore this.

Such a chromosome catastrophe (for which the authors coin the term "chromothripsis", "thripsis" is apparently Greek for shattering into pieces) could have a number of beneficial effects for a tumor, as the authors explore. One route is through the amplification of beneficial oncogenes, perhaps through the formation of small auxillary chromosomes. In a small cell lung cancer line, such a chromosome carries only 1.1Mb of original cellular content , but contains the potent oncogene MYC -- and multiple copies even.

Conversely, such a radical remodeling of a chromosome could potentially destroy multiple tumor suppressors in a single event. Possible examples of such simultaneous multiple disruptions were found in one chordoma and several other samples.

The extensive reordering of chromosomes during chromothripsis can also lead to the formation of fusion genes. But, as noted in the paper, it would seem unlikely that these are frequently tumor drivers (though never confuse unlikely with impossible!). In chronically chromosomally unstable cells, there are presumably many different possible rearrangements generated, increasing the odds of finding one with useful advantages. But with chromothripsis, the cell would have to get lucky on one mighty roll of the dice.

What could perform such a genetic wrecking act? One possibility raised in the paper, which was also the first to jump into my mind, would be high-energy ionizing radiation (probably most commonly X-rays from terrestrial sources, but also perhaps cosmic rays). Imagine a condensed chromosome and then picture an energetic particle hitting that chromosome. Some paths through the chromosome would result in one or a few breaks -- but some paths might enfilade the DNA, riddling it with breaks. Alternatively, broken telomeres can lead to the inappropriate fusing of chromosome ends, followed by rebreakage when the chromosomes are pulled to opposite poles during cell division (which in turn now have sticky ends). While this wouldn't technically be simultaneous destruction, a few successive rounds of such "breakage-fusion-bridge cycles" during cell division can generate quite a mess. It is striking and consistent with this that several examples found in the paper involve rearrangements near the end of one chromosomal arm. It will be fascinating to see if anyone tries to replicate these phenomena in controlled settings and try to create chromothripsis in the lab, and thereby determine which mechanism is more consistent with the data -- or perhaps to what fraction each mechanism occurs and any distinguishing genomic artifacts for each mechanism.

This paper has certainly altered my perspective of the chromosomal chaos seen in cancer. My previous gradualist mental model now has an asterisk. Where I previously pictured cells in a constant process of continuing rearrangement and amplification, now I can see that in some cases the genome is actually relatively static. There is a minority school of thought which has argued that aneuploidy is the critical feature of cancer and that any chemotherapeutic regimine is doomed by the dynamics of aneuploidy. Here are clearly some counterexamples; tumors which are not constitutively unstable and which do not progress after treatment due to further rearrangement. It also is a useful paper to recall the next time someone dismisses cancer genomics with the argument that cancers are dynamic, but a genome analysis looks only at one point in time. Sometimes, if you look carefully enough, a single snapshot can tell a very dynamic story.

[2011-02-03 Fixed URL for paper; Research Blogging apparently has been failing to build it correctly]
Posted by Keith Robison at 10:48 PM

Email ThisBlogThis!Share to TwitterShare to FacebookShare to Pinterest
Labels: cancer

Off course, one has to take into account the methodology of the paper; results obtained by massive sequencing and copy number analysis of a cell population are projected onto a single chromosome.

If one takes into account the heterogeneity of tumors and cell lines, the same sequencing effect can be obtained by a random distribution of breaks in a dicentric chromosme and parallel outgrowth of a dozen clones. In agreement with a model that comprises a single fusion followed by random classicla (McClintock) breakage, copy nume changes are attributed to losses (Compare the copy number of the unaffected arms from the corresponding chromsomes).

It´s surprising how only 2-3% of samples show chromothripisis (because dicentric chromosomes are so unstable?).

In this paper, it would be nice to see a more extensive analysis of probe localization (non only on cell lines like TK10).

How does actually head-to-head & tail-to-tail inversions look like?
I don't get it. Can anyone explain it?