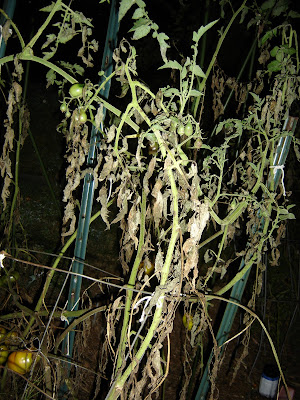 Normally this time of year I would be watching the weather forecasts checking for the dreaded early frost which slays tomato plants, often followed by weeks of mild weather that could have permitted further growth. Alas, this year that will clearly not be the case. A wet growing season and commercial stock contaminated with spores has led to an epidemic of late blight, and my tomato plants (as shown, with the night photography accentuating the horror) are being slaughtered. This weekend I'll clear the whole mess out & for the next few years plant somewhere else.

Late blight is particularly horrid as it attacks both foliage and fruits -- many tomato diseases simply kill the foliage. What looked like promising green tomatoes a week ago are now disgusting brown blobs.

Late blight is caused by Phytophora infestans, a fungus-like organism. An even more devastating historical manifestation of this ogre was the Great Irish Potato Famine and remains a scourge of potato farmers. Given my current difficulties with it, I was quite excited to see the publication of the Phytophora infestans genome sequence (by Sanger) in Nature today.

A sizable chunk of the paper is devoted to the general structure of the genome, which tops out at 240Mb. Two related plant pathogens, P.sojae (soybean root rot) and P.ramorum (sudden oak death) come in only at 95Mb and 65Mb respectively. What accounts for the increase? While the genome does not seem to be duplicated as a whole, a number of gene families implicated in plant pathogenesis have been found.

Also in great numbers are transposons. About a third of the genome are Gypsy-type retrotransposons. Several other classes of transposons are present also. In the end, just over a quarter (26%) of the genome is non-repetitive. While these transposons do not themselves appear to contain phytopathological genes, their presence appears to be driving expansion of some key families of such genes. Comparison of genomic scaffolds with the other two sequenced Phytophora show striking overall conservation of conserved genes, but with local rearrangements and expansion of the zones between conserved genes (Figure 1 plus S18 and S19). Continuing evolutionary activity in this space is shown by the fact that some of these genes are apparently inactivated but have only small numbers of mutations, suggesting very recent conversion to pseudogenes. A transposon polymorphism was also found -- an insertion in one haplotype which is absent in another (figure S9)

A curious additional effect shown off in two-D plots of 5' vs. 3' intergenic length (Figure 2. Overall this distribution is a huge blob, but for some of the pathogenesis gene classes are clustered in the quadrant where both intergenic regions are large -- conversely many of the core genes are clustered in the graph in the "both small" quadrant. Supplemental Figure S2 shows rather strikingly how splayed the distribution is for P.infestans -- other genomes show much tighter distributions but P.infestans seems to have quite a few intergenic regions at about every possible scale.

The news item accompanying the paper puts some perspective on all this: P.infestans is armed with lots of anti-plant weapons which enable it to evolve evasions to plant resistance mechanisms. A quoted plant scientist offers a glum perspective

After taking 15 years to incorporate this resistance in a cultivar, it would take Phytophthora infestans only a couple of years to defeat it.

. Chemical control of P.infestans reportedly works only before the infection is apparent and probably involves stuff I'd rather not play with.

A quick side trip to Wikipedia finds that the genus is a pack of blights. Indeed, Phytophora is coined from the Greek for "plant destruction". Other horticultural curses from this genus include alder root rot, rhododendron root rot, cinnamon root rot (not of cinnamon, but rather various woody plants) and fruit rots in a wide variety of useful & yummy fruits including strawberries, cucumbers and coconuts. What an ugly family tree!

The Wikipedia entry also sheds light on why these awfuls are referred to as "fungus-like". While they have a life cycle and some morphology similarities to fungi, their cell walls are mostly cellulose and molecular phylogenetics place them closer to plants than to fungi.

So, the P.infestans genome sequence sheds light how this pathogen can shift its attacks quickly. Unfortunately, as with human genomic medicine, it will take a long time to figure out how to outsmart these assaults, particularly in a manner practical and safe for commercial growers and home gardeners alike.

I am sad about your tomatoes... My CSA's tomatoes are being decimated, as are some of my coworkers' tomatoes. My own are being killed by spider mites in my living room, of course.

I'm a fan of P. infestans' tenacious pathogenic abilities, but only when those abilities aren't utilized. Maybe now they'll be easier to combat!

I think you are correct about what it is really close to; they aren't fungi or plants either so I'm still in the clear :-)

From my quick scan of Wikipedia and such, the taxonomy of a lot of protist-like things is still messy. of course, the whole thing isn't helped by the fact that at least some of these are the result of genome fusions.