Covaris Grabs A Spot on the Liquid Handler Deck

For as long as I can remember, Covaris has been the standard in DNA shearing for high throughput short read sequencing.  Their benchtop units had their quirks -- custom tubes being the foremost -- but they were what everyone else compared to.  In 2013 when the American Society for Human Genetics was in town, the PacBio folks did me a great favor and loaned me an exhibit hall pass.  Multiple companies were offering DNA shearing instruments -- and every one compared themselves against Covaris.  Now they have a new offering, moving the instrument onto a liquid handling robot deck so that it is available for high-throughput workflows.  Covaris invited me down to their Woburn, Massachusetts facility to get a look at the instrument before its formal launch at the SLAS conference


Covaris systems are composed of three distinct components, which have previously been housed together.  The actual acoustic energy delivery takes place in a water bath, the contents of which are temperature-controlled.  Making everything work is an electronic controller and user interface.  Previous Covaris instruments had all three in one unit, but the new instruments break this up -- a shallower water bath unit is what actually occupies the deck,  the water bath conditioning unit moves to the floor and the controller is a benchtop box.  You can see in the below image the unit fit onto a typical liquid handling deck. 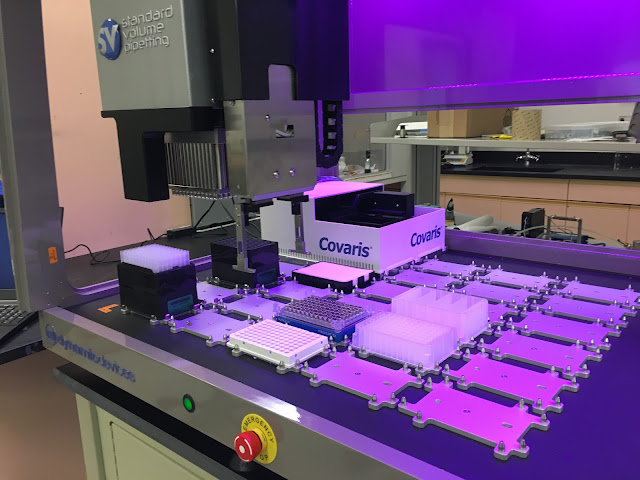 Many users disliked the special Covaris tubes which contained a solid whisker; they were one more consumable and one that came at a hefty price.  The new system uses custom plates, as would be expected for something trying to cohabit a liquid handler deck.  Each plate is RFID-tagged to enable precise tracking.  Plates come in 96 or 384 well format. The transducer treats one column of a 96-well plate or three columns of a 384-well plate at a time, enabling a similar total run time though with slightly higher variance on 384-well plates compared to 96-well plates. 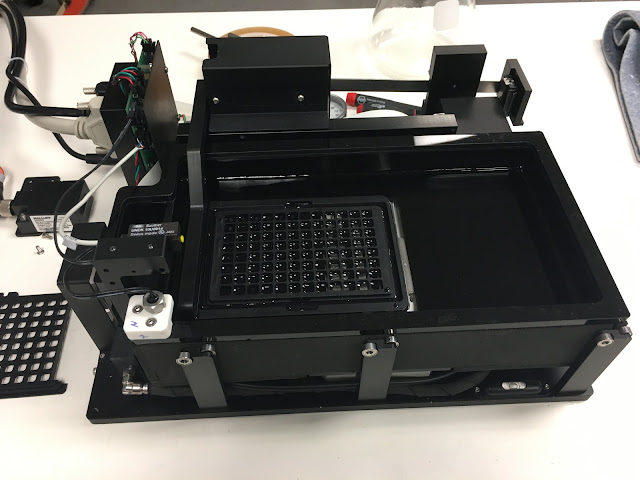 Perhaps as important as reformatting the instrument is that the transducer has been redesigned to enable much greater control over energy delivery -- enabling crafting of both the peak and average energy delivered to a sample.  That's in contrast to the old tubes, which were engineered for maximize energy delivery.  Covaris compares this to NMR -- all those COSY and ROESY methods involve modulating the pattern of energy delivery.  So waveforms can be tweaked and the pattern of how the plate is scanned columnwise changed to fit an application.  They envision -- and have results with partners -- using one protocol to break open protoplasted cells and then a different pattern to generate DNA shearing.  Or for method development, each column of a plate might receive a different pattern of energy pulses.  Transducer protocols for yeast lysis might be different than bacterial lysis and yet again different to liberate DNA from formalin fixed material.  As with any automation, the goal is to drive down costs via miniaturization while improving reproducibility and freeing scientists from dull, repetitive tasks.

That's how Covaris wants to position itself in scientist's minds -- not just breaking DNA but a flexible platform which can deliver precisely controlled acoustic energy to support many applications requiring lysis, shearing, mixing or disaggregation of biological materials -- releasing cell-free DNA from proteins or solubilizing compounds or numerous other applications.  After all, we biologists often traffic in goo -- sticky, messy mixtures that don't want to come apart.  Covaris wants to pitch in to deal with all that goo.
Posted by Keith Robison at 10:37 PM

Hi Keith, thanks for the sharing. But it seems that the main vendors of lib prep kits are putting efforts on enzymatic fragmentation for WGS/WES sequencing, such as illumina nextera and agilent QXT/XT Low Input. Would that make Covaris nervous?

Liang:
It's a good point & you can see the new instrument responding to the competition from enzymatic shearing in two ways.

On the one hand, it broadens the applications for Covaris' AFA technology -- going beyond shearing to lysis, mixing and disaggregation.

On the other hand, it may make Covaris more competitive with enzymatic shearing for high throughput labs -- enzymes could go on the liquid handler but previously Covaris couldn't. My understanding is that acoustic shearing is less sensitive to variation in amounts of input DNA, so in some applications it might have an edge.

Liang, Good question. Good points Keith. The short answer is no we are not nervous. Enzymatic fragmentation has been around for a while now and those kits may be their response to enzymatic fragmentation. Many people currently use Covaris. Some who use enzymes have recently switched to Covaris. Illumina and Agilent specifically recommend Covaris in their protocols and they are also Covaris customers. Of course they have enzymatic kits and will also recommend and try to improve the kits that they sell. Both companies are very complimentary toward Covaris including acknowledging our robustness, low bias, and concentration independence. Our new products improve our automation capabilities, increase speed, lower costs, and expand the applications for our patented AFA technology. Bill Campbell, VP Marketing, Covaris