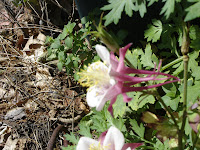 As I've commented previously, it is pleasing when a new biological finding can be related to something both familiar and pleasing. In this case, Nature has, with perfect timing, carries a paper about one of my favorite garden plants.

I like to garden but my attention to it is somewhat erratic. As a result, for the ornamentals I have a strong bias towards plants which are perennial or nearly so; in theory you plant them once and enjoy for many years afterwards. There are a few catches, however. First, the hardiness guides in plant catalogs are only rough guides, and the local microenvironment determine whether a plant will actually thrive. As a result, I sometimes end up with very expensive annuals (perennials tend to sell for 2-10X the price of an annual). At a previous residence I couldn't get one wet soil-loving plant (Lobelia cardinalis) to overwinter until I put one directly under the downspout, though about 40 miles to the south I've seen it run rampant on the sides of cranberry bog irrigation ditches. Another species (Gaura lindheimeri) refuses to overwinter for me, but a gardener (and former MLNM employee) a few towns over has a magnificent specimen.

A good perennial garden also requires a certain attention to detail. In particular, many perennials have very restricted bloom times, since they must invest energy in surviving the winter and reappearing in the spring. Many annuals bloom all summer; annuals are grasshoppers, perennials ants. So to get color throughout the garden season, a mixture of plants is needed. Certain times of the mid-summer and early fall are awash in choices, but right after the bulbs fade in early summer can be challenging.

Columbines, species of the genus Aquilegia, are wonderful perennials. While the individual plants are short-lived, plants in a favorable environment will reseed vigorously. They are in bloom now, which is why the new paper's timing is so good. Many of the flowers are bicolor. The foliage is generally a neat mound, often with a bluish tint, making them attractive even when not in bloom. The seed heads are distinctive & visually interesting. 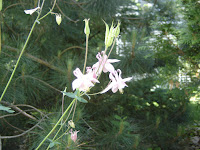 Examples of two of mine, one established & one newly planted, show some of these features.

The signature feature of Aquilegia are the spurs. Depending on the species and variety, these can be nearly non-existent to quite large . I'll confess I had never pondered the biology behind the variation, but that is now remedied.

Figure 2 of the paper shows a remarkable correlation between who pollinates a columbine and the length of its spurs. Three major pollinators were explored: bumble bees, hummingbirds & hawk moths.

The key focus of the paper is distinguishing between two evolutionary models. Both Darwin & Wallace had proposed that such long spurs could evolve through a co-evolutionary race between polinator and flower. Longer spurs mean the pollinator must approach the flower more closely to reach the nectar, increasing pollen transfer. Longer tongues on the pollinators will be favored, as they can reach down longer tubes. This model would tend to suggest gradual, consistent changes in spur length.

A competing hypothesis is that spur length changes abruptly when the pollinator shifts. After long periods of stasis, the introduction of a new pollinator drives a short-term co-evolutionary race.

There is a lot of nice data, which I'm still chewing on, in the paper favoring the latter model. The authors used a large set of polymorphisms in the genome to generate a phylogeny. Regression analysis using this phylogeny showed that inferred pollinator shifts are correlated with large changes in spur length. Interestingly, their phylogeny suggests that there have been only two major shifts in pollinator strategy, each time going from a short-tongue to long-tongue pollinator (bumble bee -> hummingbird and hummingbird -> hawk moth). One interesting supporting piece of evidence: in Eurasia there are no hummingbirds, and there are also no Aquilegia known to be pollinated by hawk moths.

By a nice coincidence I was looking something else up & discovered that the Joint Genome Institute has commenced the sequencing of an Aquilegia species. Aquilegia's family is the first branching of the dicots, and therefore represents an important window into family-level evolution of plants. 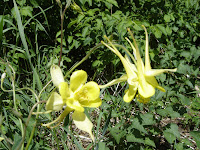 One additional consideration in garden planning is what creatures your choices will attract: some are desirable, others not. I won't plant major hosts for Japanese beetles unless I really like them (raspberries escape the edict). On the other hand, bumble bees and hummingbirds are on my desired list (though I've never been able to attract a hummingbird) whereas I'm neutral on hawk moths. So, perhaps I should go to the garden center with a caliper in hand, and only get a few of the super-long spurs just to wonder at them.
Posted by Keith Robison at 10:03 PM